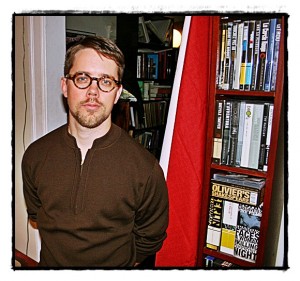 All roads lead to and from Hamtramck. You can get here from anywhere. Once this place becomes part of your experience it seems to linger, in one form or other, forever.

This week, my friend Carleton Gholz came to town for a short visit. We didn’t have a huge amount of time to spend together, maybe three hours, but we packed in enough stuff to make it seem much longer.
Gholz is a former project partner of mine. He and I started a DJ collective called Paris ’68 in 2002. Our first event was at the then newly-opened Gandhi restaurant on Conant.

Music and an Indian buffet are a perfect combination for a party. I’d been to something similar a few years before in New York, when a London-based group of South Asian electronic musicians hosted a night like this called Mutiny. Curry and tandoori chicken in one room; dancing to Sikh DJs accompanied by tabla players in another.

Carleton and I also shared a Metro Times column called the Subterraneans beginning in 2004. He began graduate school the following year at the University of Pittsburgh, while I continued the column on my own.

When he came over this week, we did some of our usual things — talked about books, played some new records, then walked over to the corner of Gallagher and Caniff for Middle Eastern food and Slovenian water. He also popped into Barberella Hair Salon for a haircut. Carleton S. Gholz looks great, in case old friends of his are wondering, as the photo here will attest.

We talked about how the corner had been transformed since last time he really dug into it. He’d never been to the impressive Al-Haramain International Foods market, which replaced the grimy Get ‘n’ Go party store. We had dinner at Royal Kabob, another new commercial piece assembled during the past five years. Across the street, Public Pool art space was also established while he was gone (as was the prior tenant, Design 99), and Bozek’s Meats had survived a fire and bounced back to become an even stronger business presence.

The corner rocked. You could feel it as we sat in a booth in the restaurant, which looked to be close to capacity, as people passed by on Caniff and Gallagher — on foot, on bicycles, in cars.

We ran into David Puls, who owns the building which contains Public Pool — and the Detroit Zymology Guild (a slow food preservation cooperative) in the back. Puls was instrumental in getting the city’s charter updated a few years back and has been a steadfast advocate of improving quality of life in the city since he hit town in the 1990s. If he’s behind a project, trust that it’s good works being done.

We also ran into Steve Panton, who has welcomed visual and sound artists to his loft on Edwin St. I introduced the two guys to each other and they appeared to instantly hit it off. They talked about Carleton’s Ph.D work on Detroit post-Motown music and culture and his proposed thesis and book as well other published works that touched on the region’s healthy obsession with sound and fury.

While he buttons up his doctoral studies, Gholz is sending out resumes for teaching jobs. Some are close to home (Wayne State University), others are not (University of Wisconsin).

“I’d really like to stay here, if I can” he told Panton, as we left Royal Kabob. “I can see myself in this neighborhood,” Carleton said to me as we walked back to my house.

We can see it too, buddy. Get that job and make yourself a home here. You’re already more than halfway there.