One more push for an accurate Census count 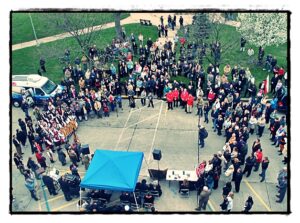 Hamtramck, be sure to be counted in the national Census. Time is running out. File photo

By Alan Madlane
Knock knock. And this is no knock-knock joke.
That knocking on your door, these days, may just be someone from the Census Bureau.
By now, some of you may have already had a visit to your home from a Census representative, if your household hadn’t already filled the census out.
And if not, well, you can probably expect someone soon. The plan was for them to begin going door to door this past Tuesday, trying to get as accurate a count for the city as possible.
Much has been made already about how vitally important it is, especially for a community struggling financially to the extent that Hamtramck is, to get everyone counted. A full count could result in Hamtramck getting larger sums of money for its budget – or not, if the city is too far under-counted.
Hamtramck has eclipsed the halfway mark in responses — which also happened to be 2010’s mark — but only by about 3% so far. They know how many houses there are in the city, obviously, but not how many people live in them — until and unless they respond.
We caught up with Ryan Bridges of East Lansing communications company Byrum and Fisk, who is handling media relations locally for the Census Bureau, and who was kind enough to take the time to respond to a few questions, with the census period winding down.

The Review: It was noted that Hamtramck is lagging somewhat behind other cities in Michigan in terms of response rate.
It’s been suggested that part of the issue here is that some of the population are mistrusting of the process, perhaps even fearing that, in giving the government their information, it could then be used to harass or even deport them.
What strategies can be employed to put people at ease, enough for them to go ahead and fill out their census forms?

Bridges: Our best tool to combat this is education. The census is confidential and, by law, responses can’t be shared with anyone — including government agencies, such as the U.S. Immigration and Customs Enforcement (ICE), or courts.
The census doesn’t ask for Social Security numbers, or any financial information. In fact, you give out more personal information when you apply for a credit card than you do filling out the census.

The Review: So to reiterate, ICE will never see these forms.
On a related note, what can be done to help people who are not that fluent in English?

Bridges: Census materials and forms are available in more than 10 languages – including Spanish, French, Arabic, Polish, Bangla and more – and can be accessed by visiting:
https://my2020census.gov/
We have enlisted surrogates from each community who are fluent in their native language to assist us with any communications barriers someone may have to completing the census form.

The Review: How has the response rate so far this time measured up to Hamtramck’s census performances in the past?
Where do you think the numbers will end up, or is that hard to guess at because there’s already been one extension of the time folks have had to fill it out, and there could conceivably be more?

Bridges: As of Aug. 3, 56 percent of Hamtramck residents have completed the 2020 Census. This is a 3-percent increase over Hamtramck’s 2010 response rate.
While we are pleased that Hamtramck residents have responded at a higher rate than they did in 2010, there is still work to be done.
Our goal is for everyone living in Hamtramck to complete the 2020 Census. Starting August 11, census workers will begin going door-to-door to help households that haven’t yet responded complete their Census form.
That is why is it important for us to work closely with media outlets such as yours, to get the word out on the importance of completing the census forms as soon as possible.

The Review: Please go over yet again for our readers why it is so vital for the city’s well-being that we have as many residents accounted for as possible. What are some of the programs or services that could be at risk of being lost if Hamtramck is under-counted?
Bridges: Completing the census is a critically important civic duty that determines funding for local communities and essential services, shapes congressional representation, and is used to determine legislative districts.
Accurate census numbers are critical because they determine how much federal funding Hamtramck will receive for public safety, schools, housing, programs for seniors, health care and much more.

The Review: What if people have misplaced their card(s) — I know you send out multiple ones to every address — and don’t have access to a computer, what with the library and schools closed?
How can people request another card? Is there somewhere they can go nearby to fill out a card in person on the spot?

Bridges: The process of completing the census has never been more convenient. The census can be completed by mail, phone and — for the first time — online. If someone has lost their paper questionnaire or doesn’t have access to the internet, they can complete the census by calling (844) 330-2020.

The Review: Given overall population growth, and its ramifications for so many aspects of human life, is 10 years too long between censuses?
Does the federal government need to consider doing this every five years, or six, or seven, in your opinion, or is that just not financially practicable?

Bridges: The census is mandated by the U.S. Constitution to happen every 10 years, and is known to be the gold standard of data. The US Census Bureau conducts a number of other studies over the course of the ten years, between censuses, to update community data.

The Review: Please feel free to add anything that you want to at this point that you feel people should be aware of.

Bridges: The U.S. Census Bureau will kick off its door-to-door effort on Aug. 11. Census workers will only visit the homes of Michiganders (including Hamtramckans) who have not completed the census by mail, phone or via online.
Census employees are required to complete a COVID-19 safety course, maintain a social distance outdoors during census interviews, and wear masks to protect the health and safety of all Michiganders.

We want to again thank Ryan Bridges for taking the time to provide answers for our readership, on this most-important of topics.
Now it’s up to you, Hamtramck. Please complete your census, and do it soon, or at the very least, make yourselves available to the hard-working staff going door-to-door in the summer heat for your city’s long-term benefit.
(Editor’s note: At this point, the Census is scheduled to end its counting phase in Michigan on Sept. 30.)
Posted Aug. 21, 2020