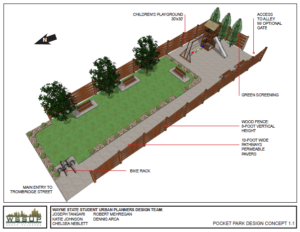 By Alan Madlane
Hamtramck’s scant public park space is getting a tiny, but meaningful, boost.
An unnamed person donated the empty lot at 2134 Trowbridge, located between Lumpkin and Brombach, specifically to be turned into a public park – or in this case what’s known as a pocket park.
Wayne Metropolitan Community Action Agency, aka Wayne Metro, are overseeing the project, now named the “Salam Peace Park.”
The effort has a crowd funding effort attached to it, located on Patronicity (see specifics at the end of this article). They are attempting to raise $22,000 over the next two months, which would trigger a matching grant from the Michigan Economic Development Corporation (MEDC).
Any amount raised above that target sum “would enable the park to be built with higher quality inputs and materials,” they say.
Hamtramck currently is only about three percent greenspace, putting it on a par with such clogged urban areas as Mumbai, India and Shanghai, China, according to a bar graph included on the fundraising site.
The Salam Peace Park – and yes, the name is a bit of a redundancy, since the word “salam” means “peace” in Arabic (although it is also frequently used as a general greeting) – is actually a well-planned use of a modestly sized space.
The park-to-be sits between two other homes on Trowbridge. How on-board with the project those homeowners are is an interesting speculation.
As imagined by the five members of the Wayne State Student Urban Planners Design Team (Joseph Tangari, Katie Johnson, Chelsea Neblett, Robert Mehregan, and Dennis Arca), the small park will feature 8-foot-high wooden fencing along the sides, and part of the alley end; two different sets of three trees; five benches; a children’s area 30-foot square, with a playset including swings, a slide and a treehouse; and a bike rack.
Proponents ask that, if you like the idea, you consider these or other ways to support it: donate money toward it; let everyone you are connected to know about it; and pitch in at points when volunteers are needed.
As of the time of this article’s writing, $1,615 had already been raised.
You can find out more by going to Patronicity.com and entering “Salam Peace Park” into the search window.
Posted Aug. 7, 2020