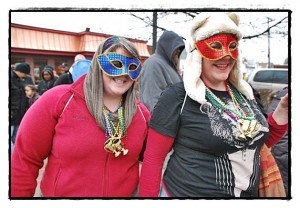 Time to get your Mardi Gras on this Tuesday here in Hamtramck when the town celebrates Paczki Day.

On Thursday as we were getting ready to go to press, you could almost smell it in the air.

Yes, it’s that time of the year again when we can sniff the sweet smell of sugar and booze, consumed while getting your ya-ya’s out to the beat of a polka band.

As you read this a gazillion paczki are being fried up, packaged and put into the hands of thousands of “dough-eyed” — pardon the pun — paczki lovers.

Hamtramck is gearing up for next Tuesday’s Paczki Day (Feb. 12). Before the big event, a “Countdown to Paczki Day” party will be held on Saturday under a heated tent pitched in the strip mall parking lot at Jos. Campau and Holbrook.

That party runs from 11 a.m. until 3 p.m. and features free paczki, live polka music and Mayor Karen Majewski dressed up in a Polish folk costume and performing some amazing Polish folk dance moves.

We’re not kidding. She really can dance.

But back to Paczki Day – Hamtramck’s version of Mardi Gras, with maybe a little less of the New Orleans kink. Well, maybe.

This year’s festivities seem to be dialed up more than usual. Maybe that’s because about three or four years ago Paczki Day had a revival of sorts. We’re not sure what brought that about, but the city has been experiencing a huge uptick in visitors.

The city’s four bakeries obviously love all the attention, and the local bars and veteran halls are also cashing in. There is no shortage of fun to be found.

For the record, Hamtramck’s two favorite bakeries are New Palace and New Martha Washington, both within walking distance of each other on Jos. Campau, just south of Caniff.

Just look for the long lines.

If you want to venture off the beaten path – and avoid the wait – check out Hamtramck’s two other paczki makers: Detroit Donut in the strip mall at Jos. Campau and Holbrook, and Family Donut on Caniff and Conant.

So, how does one enjoy this Paczki Day thing?

You could start the day off at 7 a.m. over at the Moose Lodge on Conant near Holbrook where they will be serving up breakfast.

You could then head over to New Dodge Lounge where the Polish Muslims will be playing an early show.

After getting juiced up on “Jezy,” you could then stagger over to Whiskey in the Jar in the afternoon where the Polish Muslims will play another set.

For an early dinner, get yourself over to PLAV Post 10 hall where you can also enjoy a third and final Polish Muslims set.

If your head isn’t spinning yet, be sure to then stop at Small’s for more live music and mischief.

All kidding aside, if you plan to party hearty, be sure to take a cab home or coax a friend to be a designated driver.

One thing is for sure, if you want a good time, Hamtramck on Paczki Day is the next best thing to Mardi Gras in the French Quarter.