Paczki Day once again puts Hamtramck in the media spotlight 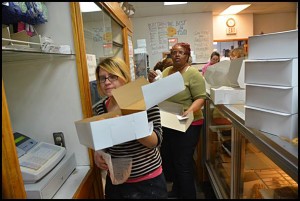 Paczki Day was another huge success for the city’s bakeries

By Commander Cody and his Lost Planet Airmen

Despite freezing temps and a biting wind, thousands and thousands of visitors stood outside in lines on Tuesday just to get their hands on a box of paczki.

You could say they are either committed or crazy. 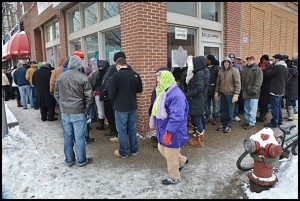 No matter what, Paczki Day in Hamtramck was another rip-roaring success for the bakeries. No one really knows how many dozens of paczki were sold, but one thing is for sure: those lines of paczki lovers lasted from early, early morning right through the evening.

And, as usual, the day was a huge boost to local bars, some of which featured bands all day and night long. 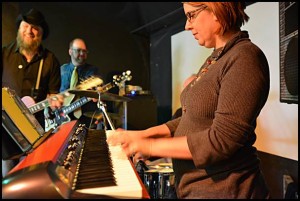 Add a little polka with the surreal sounds of Pink Floyd and what do you get? Polka Floyd.

At 11 a.m., you could barely squeeze into New Dodge Lounge where The Polish Muslims made their first of three appearances that day. The crowd was loose, dancing and freely downing Jager shots.

Bar owner Cathie Gordon said while there was plenty of drinking, many of those who came also brought along a designated driver. After The Polish Muslims played, the crowd thinned out a little, but Gordon said that was just a brief lull.

Also churning out the drinks and Polish meals were Whiskey in the Jar, PLAV Post 10 and Small’s Bar. 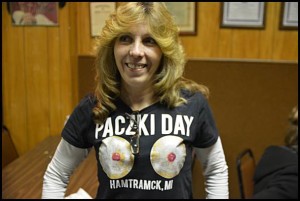 Paczki Day kicked off on Saturday with a 5K run through the city’s main and side streets. That run attracted 1,800 participants, said run organizers. And because this is Hamtramck, there was a special treat waiting for runners at the end of the course — a paczki and a beer.

There also seemed to be an uptick in media attention about the festivities. Perhaps one of the more unique angles taken on the day was by a Fox 2 TV reporter who took a box of paczki to a health food store and offered them for free.

Well, maybe that was a little on the snarky side, but it was certainly in tune with the Mardi Gras vibe of the day. 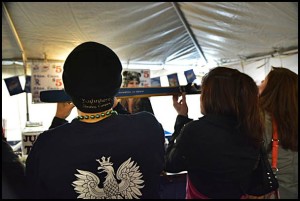 At Post 10, The Polish Muslims capped off their day with a three-hour set. Although their voices were hoarse, the bandmembers kept the crowd dancing. 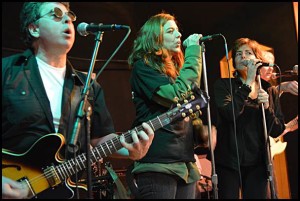 It’s not a Paczki Day party without the appearance of The Polish Muslims.

Down below the second floor, those enjoying a Polish meal and drinks were treated to the arrival of the Detroit Marching Band who helped crank up the fun several notches.

Can’t wait for next year!