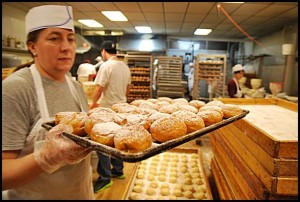 The Polish community isn’t laughing at a YouTube parody of Paczki Day, Hamtramck and Poles. They are demanding the film be removed from YouTube.

A parody video of Paczki Day and Hamtramck is not tickling the funny bone of the Polish community.

A film by John Kerfoot called “Pure Michigan: Fat Tuesday” has raised protests from the Piast Institute in Hamtramck and the Polish Consulate General in Chicago. They are demanding the film be taken down from YouTube.

In the film, the narrator says on Paczki Day “everybody is Polish, which means they are all fat and stupid.”

Dr. Thaddeus Radzilowski, President of the Piast Institute, said the language and image of Poles in the film is not unlike Nazi propaganda from the 1930s that was used to degrade Poles.

“It is hard to believe that in the early 21st Century one would hear such open expression of virulent and vicious racism,” Radzilowski said in a press release. 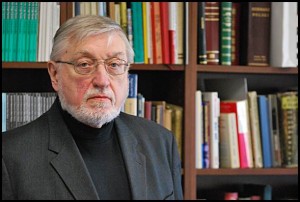 Dr. Thaddeus Radzilowski, President of the Piast Institute, said the language and image of Poles in the film is not unlike Nazi propaganda from the 1930s that was used to degrade Poles.

“Compare those descriptions with Kerfoot’s statements that Poles are ‘fat and stupid.’ They are people who ‘look like zombies.’ Their city is ‘ugly and gray.’”

The Polish Consulate also weighed in on the issue, demanding YouTube remove the film because it violates YouTube’s rules against hate speech. The Consulate said the use of the word “Polack” is considered “a derogatory reference to a person of Polish descent.”

Since the film was first posted on YouTube on Feb. 11, the filmmaker posted an “apology.”

Mayor Karen Majewski said that it wasn’t really an apology. Instead, she said, Kerfoot, who is a film instructor at Wayne State University, delivers the apology in a “snarky” manner.

“He makes a mockery of his own apology,” Majewski said. “It quickly morphs into a parody of an apology.”

In an ironic twist, Majewski said Kerfoot was hired in the past by the Polish Day Parade Committee to film the parade. The film he produced on the parade, Majewski said, “was really beautiful.”

“Why would he burn that bridge?” she added.

This isn’t the first time Kerfoot has faced criticism of his parodies on the state’s promotional ads called “Pure Michigan.” He has focused his lens on other communities and ethnic groups and drawn heat.

Kerfoot does have his fans who say his jabs are only meant to entertain.

On his Facebook page, Kerfoot had this to say about the latest controversy:

“I’ve pissed off the entire Polish population. meh. But a friend asked me ‘Aren’t you worried somebody might try to kill you?’

“I’ve thought about that, and I thought it would be cool to be assassinated. Think of the class of people I’m in with; Abe Lincoln, JFK, Martin Luther King. And me … an asshole who said shit about pollacks (sic) in a video. Love it.”