Parents are increasingly becoming involved in their schools 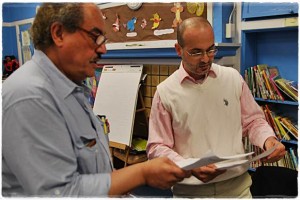 Mac Saleh, left, of the state PTA goes over some organizational information with a parent at Holbrook Elementary School where 30 parents met to form a local PTA.

The word is getting out.

School is the place to be.

A new group of parents have formed a Parent Teacher Association in the public and charter schools, and are seeking to get more parents involved.

So far, 50 members have joined. Leaders of the new group recently met with the Hamtramck Public School Board to announce their effort.

The Review spoke with one of the organizers, Fateh Obaid, who said so far the group is composed of mostly Bangladeshi and Arab-American parents. But Obaid said he wants a bigger cross-section of the city to join.

He said the group formed to help students succeed in school and be able to move on to college.

“The bottom line is making our kids successful,” Obaid said. “Without education, you’re locking them out of jobs.”

Obaid concedes that it will be a challenge to get more parents involved because of their work schedules.
“It’s hard to find free time,” he said. “Some parents work 12-15 hours a day.”

On Wednesday afternoon, a group of 30 parents met at Holbrook Elementary School to elect officers of the PTA formed at the school, and to get some direction from a representative of the Michigan PTA.

Mac Saleh, of the state’s PTA, said the local PTA is “the voice of the parents.” He said parents have a keen interest in their children’s education.

“They feel that parents are not represented, have no voice in their children’s education,” Saleh said.

“This is really exciting,” he said.

10 Responses to Parents are increasingly becoming involved in their schools