Petition drive gets the job done 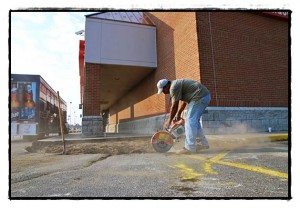 Making the sidewalk handicap-friendly at the Town Center.

You know that old saying, “the pen is mightier than the sword”?

Well, it sure is true.

A petition with over 100 signatures of Hamtramck residents convinced the owner of the Hamtramck Town Center to make it more handicap-friendly.

And by handicap-friendly, we mean one simple curb cut at the north corner of Rite Aid. Residents at the Hamtramck Senior Plaza had complained that the sidewalk crossing leading to Rite Aid was blocked by a curb, which forced those in wheelchairs or with walkers to go around into the driving lane of the shopping center.

During bad weather, seniors said, there were a number of close accidents with oncoming cars. You could say it was a major lawsuit waiting to happen.

The petition was submitted several weeks ago. Jane Schuermann, the property manager of the Town Center, apologized for not getting the curb cut done sooner.

“We lost our cement men,” she said. “But we are putting one in.”

Believe it or not, that wasn’t a line of BS. Because this job is so small, most cement crews don’t want to waste their time on it.

But on Thursday morning, the Dellacasa Cement Company came out and made the curb cut and installed a nice wide ramp.

A small group of seniors, along with Ron Orr from the Hamtramck Initiative, who helped organize the petition drive, gathered to look at the work and pose for a photo.

“Awesome,” was the what Joan Barrios had to say about what was happening.

And a big thanks goes out to Arkan Jonna, a local developer and the owner of the Town Center, for being an all-round swell guy and caring about the needs of the handicapped. 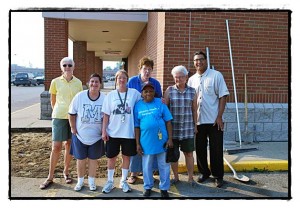 A curb cut was made at the Hamtramck Town Center strip mall to make a sidewalk at Rite Aid handicap-friendly. This was done after over 100 seniors submitted a petition. Some of the seniors who signed the petition posed for a photograph in front of the sidewalk, and they are, from left to right: Joan Barrios, Frances Zajic, Carol Rutkowski and Gladys Roberston. Back row: Carol Marsh and Boguslava “Barbara” Mazur. That’s also Ron Orr of the Hamtramck Initiative, who helped organize the petition drive, standing with them.