Pharmacist knew early on he wanted to serve his hometown 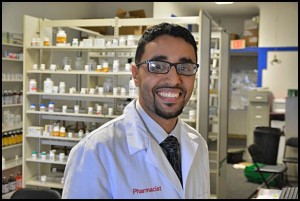 Dr. Ali Thabet is the owner of the newly-opened Infinity Drugs Pharmacy on Jos. Campau.

After seven years of hard work and dedication toward earning a doctorate in pharmacy at one of the top pharmaceutical programs in the world, Dr. Ali Thabet has finally reached his lifelong goal of opening up a pharmacy in his hometown.

Infinity Drugs Pharmacy is one of many pharmacies located Hamtramck, but Thabet believes that as a pharmacist he brings a uniqueness to the table that his patients can appreciate.

“Growing up in this city for most of my life, I understand what it takes to not only be successful, but to make the community around me happy,” Thabet said. “If you look at the track record of all the other pharmacists who own pharmacies in Hamtramck, you’ll learn that these people are not from around here. I believe that can make a huge difference when it comes to understanding your patients and meeting their needs.”

Thabet, who graduated from University of Michigan in Ann Arbor, got his education start in Hamtramck.

He attended Dickinson East Elementary School, Kosciuszko Middle School, and graduated out of Hamtramck High School in 2005 with a grade point average that ranked third in his class.

During his four years of high school, Thabet also earned a varsity letter in basketball, football and baseball; and was a multiple time captain.

Thabet said he got the bug for medicine early in life.

“When I was a little kid all I ever wanted to do was to make a difference in this world,” Thabet said. “So as I started to get older I knew I wanted to be around medicine my whole life, to ensure that the people who were the closest to me would live a happy and healthy lifestyle.”

He also said witnessing the financial struggles of so many in Hamtramck inspired him.

“I felt it was necessary for me to open up a pharmacy in my hometown so that I can take care of the people who are close to me all while helping boost our economy. Now I’m just trying to make a dream into a reality.”

Infinity Pharmacy is also a family affair. Ali’s brother Muhammad works there as a technician.

“Throughout our lives my brother Ali and I would compete with one another in everything you can imagine,” Muhammad said. “I have to admit that his competitiveness and will to succeed are second to none. In the span of a couple years he turned from the greatest competition I had to the best role model I have.

“Now I just hope the journey my brother Ali went through to get to where he is today can help influence other local citizens from our neighborhood to follow their dreams. Ali should be a physical example of whenever there is a will, there is always a way.”

(Editor’s note: This story is truly a family effort. Omar Thabet is a brother of Ali and Muhammad and is a journalism student at Michigan State University. He was also a star quarterback for the Hamtramck High School Cosmos.)