‘Plague Doctor’ has message for all: clean up this town 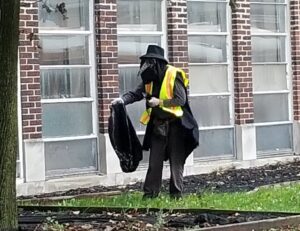 Hamtramck’s mysterious “Plague Doctor” is on a mission to clean up this town, and inspire residents to pick up litter. Photo by Pill Kwik

By Alan Madlane
Hamtramck has a benevolent presence lurking its main streets on certain misty mornings.
A wraithlike apparition, clad in black, with eerie, crow-faced features. Who could they be? And what could they want?
Well, it turns out that they want to pick up the city’s trash, and see the city, which they call home, looking cleaner.
You see, that apparition – have you seen it yourself? – is the Hamtramck Plague Doctor.
Documented before, in these very pages – you don’t litter the street with this newspaper after you’re done reading it, do you? – Hamtramck’s Plague Doc is a one-unit whirlwind of trash-attacking energy, who never met a stray plastic Popov half-pint or filthy facemask they weren’t willing to vanquish.
Preferably, directly into their accompanying trashbag.
We did manage to net the crafty Doc for a round of questions, to try to help undo the swirling mystery they leave in their do-gooding wake.
Note how slyly they circumvent any attempts to reveal their identity – or their plans for worldwide domination.
Foiled again!

The Review: What’s up, Doc? So – exactly how did the Hamtramck Plague Doctor first come into being?
Plague Doctor: The Plague Doctor arose from the needs of the town.
At the beginning of the pandemic, we all felt helpless. I found solace in cleaning up the discarded masks and gloves that were visual images of our situation.

The Review: Hmmm. Interesting.
How long has the Plague Doctor been with us now, here in Hamtramck, all together?
PD: I have always been here. And, it is quite likely that I always will be.

The Review: Terrifying, and yet comforting, all at once.
Speaking of which, and given the season, what are some of the Plague Doctor’s favorite scary movies?
PD: I am not a fan of horror. Villains in costume scare me! I am partial to romance. My favorite movie is “How Stella Got Her Groove Back.” It is Angela Bassett that does it for me!

The Review: Peculiar specificity…!
Now, will we see the PD this winter at all? Or do they go south to Boca when the cruel winds blow? Do they even make long johns that would fit a plague doctor?
PD: I have never left Hamtramck. I believe I would be misunderstood elsewhere.
And I am not certain that the TSA would allow me to travel on planes.

The Review: Point made, point taken.
What are some of the more common types of trash that you have picked up (and that people should know better than to toss on the ground, all willie-nillie)? What are some of the stranger items? Have you managed to find anything actually valuable?
PD: I have picked up over 3,000 gloves and 1,000 masks. I have also found many, many more socks than I could ever imagine. Maybe these were all the socks you could not find after washing day?
The most valuable thing I have found is the quiet and peacefulness of an early morning in Hamtramck.
(Ed. Note: The PD actually later provided a tally sheet they were keeping as they worked. And it really does show a lot of COVID-related masks and gloves, and socks, but also empty liquor bottles and – get this – “weed bags.”
Hamtramck, could it be that you’re going to your local dispensary, “scoring,” and then “firing one up” in your car while pitching the evidence bag out of your car window? Bad, Hamtramck. Very, very naughty.)

The Review: Well, riddle me this, speaking of clothing items: Does the Plague Doc have a variety of outfits, or just one? And if more than one, how does the good doctor choose what to wear on any given day?
PD: Oh, I usually just put on whatever I pick up in the morning.

The Review: Shockingly pedestrian.
So, how much do you know about actual plague doctors throughout history? Where did the phenomenon start?
Are there any famous plague doctors, either retired, dead, or still doing it?
PD: Yes. The Plague Doctor has been valuable to communities for centuries. In the 1300s, we helped combat the Bubonic Plague. We always return in time of need.
Interested readers can find more on their small devices or at their local public library.

The Review: I see what you did there – trying to make yourself look all peace-loving and useful and whatnot. Let me remind you, sir or madam, that the jury is still out – and that jury is our readership, who will no-doubt weigh in (at least one of them, anyway) to crucify us for how silly I’ve let this get.
Back to business: What is the realm of the Hamtramck Plague Doctor? Do your duties “bleed over” into Detroit, Highland Park, or other cities? Have you ever hopped on public transportation, hailed a cab, or scheduled a Lyft or Uber in full-on regalia?
PD: So far, I have only explored on foot, but that sounds like fun.

The Review: Oh, I just bet it does!
Which brings me to: Are children afraid of you? Should they be?
Or what about adults? Do you ever, for example, visit them in their dreams, to try to persuade them to change their filthy ways?
PD: Children are fascinated by me.
They should not be scared! Children know much more than many adults. They instantly understand what I am doing.
I have had young people spontaneously help out. One young man asked if I was saving the earth. I told him that maybe, with his help, we still can.

The Review: There’s that usefulness again.
Does the Plague Doctor have a gender, or do they prefer to be thought of as gender-neutral?
PD: As far as gender, I find it irrelevant to my duties. I prefer neutral pronouns (they, them, doc), as were common when we first appeared to help.
I am pleased to see the current progress on this issue.

The Review: Well-evaded. It’s as though you saw right through our paltry attempt to reveal who you really are. Darn it all to heck!
All right then: What is the Plague Doctor’s relationship with the other Hamtramck “Trashies” – competitive, cooperative, combative or supportive?
PD: The Trashies were inspired to help, as Hamtramck litter is not a one-Doctor job. (Ed. Note: Boy, you got that right.)
I am grateful to collaborate with my wonderful new friends. They are dedicated and hard-working. And, I know they appreciate all the donors that help make their work possible.

The Review: Does the Plague Doctor have another name people could call them by, when people see them on the streets, or should it just always be “Hey, Plaguey” or “Hello, Mr. or Ms. Doctor”?
PD: You can call me Doc.

The Review: Cagey. You’ve bested us at every turn.
Well, lastly, what advice can you leave with us that might be passed down to future generations of plague doctors, as they may arise from out of the formless muck over by the south end of town (or is it the west end of town? East? North? Where the heck do you come from, anyhow?)
PD: Everyone can be a Plague Doctor, with or without a costume. Every piece of litter you pick up, or every piece not thrown out at all, will help out our town.

The Review: All right, well, thanks, Doc. We’ll assume that your ultimate prescription for the city is, “Clean yourself better!”
See you around!

(I could feel their presence wane suddenly, even through the miracle of email. Just like a wisp of smoke – were they ever really there at all? – the Hamtramck Plague Doctor had gone. But I knew it was only – only! – for a moment. Because if you know one thing, it’s that: if you’re talking about Hamtramck, you’re talking trash. And yeah, we love Hamtramck — even when they’re being trashy.)
Posted Nov. 26, 2021