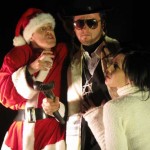 By Alan Madeleine
If you’re a fan of fast-paced fare with a Jewish flair, from Marx Brothers to Mel Brooks comedies on down, you’re the target audience for “The Hebrew Hammer,” the frantic and often funny new offering at Hamtramck’s Planet Ant Theater.
Stomping un-PC on stereotypes both Jew and goy (and black, and elf, and maybe Eskimo), this is a labor of love from Frannie Sheperd-Bates (herself Artistic Director of Detroit’s Magenta Giraffe Theatre Company), who adapted the script from the little-seen 2003 film, and then directed besides.
The pace is hell-bent right from the offing, perhaps a bit too much so at first. As it straddles the line between comedy and farce, it crams a few too-many scenes (and scene-changes) into the first act’s set up, resulting in some players getting caught in the rising lights at times. But it levels out soon enough, and we get the main plot: Santa’s evil son Damian (none of this is much subtle) offs the shocked old codger, and then plots to eliminate competing holidays of Hanukkah and Kwanzaa because – oh, I don’t remember why.
Pure spite, perhaps?
In to save his People’s holiday is tough-talkin’, Star of David-wearin’ gumshoe Mordechai Jefferson Carver. Together with the JJL (sic) chief’s daughter Esther (whose last name wouldn’t fit in a standard news column, but is a funny bit in itself), they team up with Black Power head dude Mohammed (whose full name may be an even better joke) to bring down the Polar Lord of Darkness, and all in a brisk 38 minutes per act.
Role players get to have some of the most fun, and the five-person supporting ensemble doubles as scene changers. Lisa Melinn plays Hammer’s Jewish mom with a tuches the size of a boxcar, which makes even sitting down funny. Richard Payton’s hysterical Son of Santa (remember that anagram, kids!) gets laughs, and may remind theater vets of a lankier Andrew Huff.
Newcomer Hugh Duneghy II is a stitch as cool Mohammed. Jon Ager, as Mordecai, and Sarah Switanowski as Esther show a nice chemistry — and a fine ability to hork out a consonant.
A special mention must be given to Michelle Becker’s outstanding (and numerous) hand puppets, who represent everything from the JJL members to Yahweh-knows-what.
“Oy to the Veh,” indeed. If you have a sense of the irreverent, you’re sure to enjoy a little time with the “Baddest Hebe this side of Tel Aviv.”