Plenty of other improvement projects are happening in town 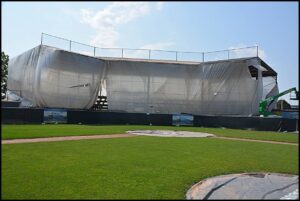 Renovation is underway at the historic Hamtramck Baseball Stadium. The grandstand is undergoing a major repair and once completed, people will actually be able to sit their and enjoy watching a game.

By Charles Sercombe
Hamtramck never rests.
Just as the Caniff Ave. reconstruction project was getting buttoned up, two other city projects got underway.
After a big press conference several weeks ago, announcing major funding for the renovation of the Hamtramck Stadium grandstands, work has begun. There is not much to see there right now, however, because the grandstand is covered by a giant tarp.
But we were able to peek inside (well, a flap in the tarp was open) and we saw that the benches have been removed, and the seating area stripped down to the metal support beams.
The project will take until right before the bad winter weather sets in — OK, in fickle Michigan that could be next month — to complete.
Funding for this huge job comes from a variety of sources, including a Wayne County grant for $850,000, and $2.6 million from several other sources, which include:
The Friends of Historic Hamtramck Stadium; the Hamtramck Parks Conservancy; the Detroit Tigers Foundation; the Ralph C. Wilson Jr. Foundation; the Kresge Foundation; the Michigan Municipal League Foundation; and the National Park Service/Department of the Interior.
That’s a long list of folks who don’t mind spreading their love or money.
And that’s because this is no ordinary baseball stadium. Its history goes back to 1930, when construction began. It was built for the then-Negro Baseball League, in a time Major League Baseball would not allow African-Americans to play ball with whites.
No matter, many legendary players came through here, most notably Detroit’s own Norman “Turkey” Stearnes, who played for the Detroit Stars at the stadium.
In other improvement news, this year’s sidewalk replacement plan is ongoing. This is a project that the city council scaled down, from charging property owners to instead financing a smaller version with a $100,000 budget in city funds.
This year the following streets will see their worst sidewalk slabs replaced:
• Denton, between Lumpkin and Jos. Campau
• Alice, between Lumpkin and Jos. Campau
• Lumpkin, between Denton and Holbrook
• St. Aubin, between Denton and Holbrook
Road repairs also continue. Wayne County is funding the resurfacing of Conant, from Holbrook to Hamtramck Dr. That work is scheduled to begin on Sept. 20 and be completed by Nov. 15.
So, the year of orange barrels is not over. The county says it will always keep a lane open for traffic during the project.
Sure.
That’s just what they said about the Caniff project, and guess what? That rarely happened.
But on the plus side, we finally have some major streets that are no longer filled with potholes.
Posted Sept. 17, 2021