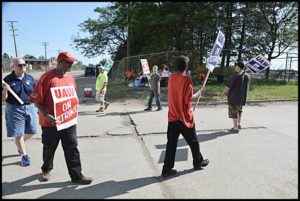 UAW members are striking at all of GM’s auto plants, including the Poletown plant.

By Charles Sercombe
As they say in baseball, it ain’t over ‘til it’s over.
GM is now offering to keep its Poletown and Lordstown, Ohio plants open, if UAW members agree to contract terms laid out by the automaker.
The United Auto Workers went on strike this past Sunday, shutting down work at all GM plants.
Several months ago, GM announced that it was closing the Poletown and Lordstown plants, as well as one in Warren and another in Canada. The company said it was shifting its production to electric cars and driverless cars.
Poletown is slated to close down this January.
GM is now offering to build electric pick-ups there, and batteries at the Lordstown plant.
The UAW wants all four plants to remain open.
News of the Poletown closure came as a shock to many, including Hamtramck officials.
Hamtramck relies on GM as a major revenue source. Part of the Poletown plant is on the Hamtramck side of the Detroit border.
Hamtramck receives about $800,000 a year in lieu of taxes. That loss of revenue would be devastating to the city. Since the announcement of the plant’s closing, officials here are still scrambling to figure out ways to adjust the budget.
GM’s offer to keep the plant open raises more questions than answers.
The major question is, just how sincere is GM about keeping the plant open?
Could this just be a bargaining chip?
It also raises the question of whether GM would continue to make its yearly payment to the city.
City Manager Kathy Angerer has been in contact with GM during the past several months, along with state economic development officials, to come up ways to keep the plant operating, or else suggestions for repurposing it.
The Review asked Angerer this week if she had any inside knowledge of the plant’s future.
She would only say that she has “none to share.”
The UAW strike is predicted, by those knowledgeable about the matter, to possibly last several weeks to even a few months.
One striker The Review talked to, said union members are “prepared to stay here as long as it takes.”
Sept. 20, 2019