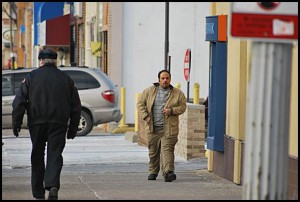 A major crime wave has apparently come to an abrupt halt.

For the past few weeks, over a dozen street robberies have occurred throughout the city, including side streets.

Most notably, though, have been several armed robberies of people using the ATM machine at PNC Bank on Jos. Campau and Caniff.

On Monday, the robberies reached a new level of outrageousness when two separate robberies occurred within two hours of each other at the ATM machine.

Police said they believed one crew was targeting the town.

On Tuesday evening, Hamtramck police were out in force to catch the suspects. They struck gold.

According to the police department’s daily crime report, officers noticed a car that had been previously carjacked being driven in the area. A high-speed chase ensued which ended in a crash at Charles and Mt. Elliot. A squad car was also rammed by the fleeing driver.

According to the police report, Tyquan Clanton and Brandon Hedwood were arrested. A third suspect, Tyler Hill, was later arrested in a raid at his Detroit home.

The suspects have not yet been arraigned, and police declined to release further information about the suspects. Police Chief Max Garbarino did say, however, that they ranged in age from late teens to early 20s, and that they lived in the area.

Asked what motivated the suspects to continually target Hamtramck in predictable routines, Garbarino said that they are “newbies” who are inexperienced in the ways of committing crime.

The suspects were expected to be arraigned on Thursday, which is when The Review went to press.

Garbarino said it appears the suspects can be connected to many of the street robberies, including those that happened at the ATM.

A spokesman at the Hamtramck PNC Bank branch said he could not comment on the ATM robberies.

Police investigators said that initially, PNC corporate representatives demanded a subpoena before handing over photos taken from security cameras at the bank. Police said that after further talks PNC officials agreed to supply the photos without a subpoena.

Garbarino credited his officers for cracking the case.

“My guys did a hell of a job,” Garbarino said. “This wasn’t a lucky break. It was good old-fashioned police work.”

The chief also credited the community for its involvement and spreading the word through social media outlets, such as Facebook.