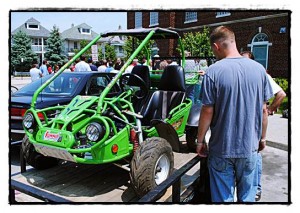 You want a hot deal on a used car, industrial-sized fan, big-screen TV or bag of jewelry?

Well mister, you should’ve been there on the steps of City Hall last Saturday afternoon, as merchandise, auction goers, curious spectators and police alike sweltered in the 90-plus steam bath that was the 2011 confiscated property police auction.

Familiar faces, local businesspersons and others jostled for a better look, or to shout out their price, on nearly 20 vehicles, as well as numerous bicycles, fans, a/c units and tables full of tools and other smaller items. 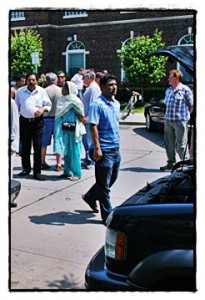 Many hoping for a bargain on a vehicle found themselves on the wrong end of a bidding war with deep-pocketed local used-car car dealerships, even though the vehicles — some autos, SUVS or jeeps, a couple of vans, a pair of motorcycles, a trailer and a dune buggy, collected from criminals during drug raids or the like — tended to go for between $600 and $2,000, with one or two exceptions.

An assistant started each vehicle, most of which complied, a few of which did not. Bids flew regardless. A few oaths were uttered. One frustrated man, putting a bid in too late, moaned that the auctions were being closed too abruptly.

Sgt. Wally Tripp, the officer conducting the sale, good-naturedly reminded the crowd to speak up and raise their hand to have their bid seen and heard.

Caught up to by phone afterwards, Tripp noted that the annual auction brought in about $30,000 for the department. The money raised goes to help pay for new vehicles and other equipment.

He reminds people, as he does when he speaks at block club meetings, that a few dollars spent on an engraver can pay for itself many times over.

“If you engrave your name on your belongings, we can get them back to you if they turn up stolen,” he said. “Otherwise, the stuff can easily end up out here.” 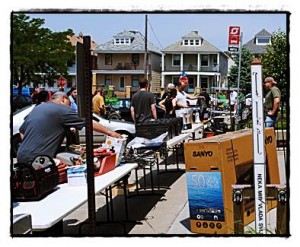 4 Responses to Police auction brings out the big bidders