Police chief on his way to Bangladesh for diversity training 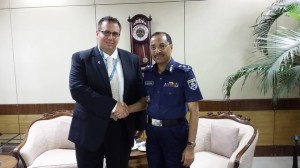 Hamtramck Police Chief Max Garbarino (left) meets with the Inspector General of the Bangladesh Police during his visit to Bangladesh.

By Charles Sercombe
Hamtramck Police Chief Max Garbarino is going half way around the world to better get to know the city’s growing Bangladeshi community.
Garbarino and a Hamtramck officer assigned with the DEA will be visiting Bangladesh in a U.S. State Department-funded trip designed to increase cultural sensitivity and swap police expertise.
Garbarino said he hopes to come away from the experience with “a better understanding of Bengali customs.”
The other officer, who Garbarino asked not to be named because of his position with the DEA, will stay the longest, about a month, to pass on his knowledge.
Most of the time the two will be at the country’s national training academy for police officers.
Garbarino said he hopes that more Hamtramck officers will be able to undergo cultural training with visits to Bangladesh. He said that this visit was a few years in the making.
While Hamtramck’s Bengali community has made a sizeable impact on the city, there are currently no officers from that community on the police force here. That’s something Garbarino said he hopes to change in the coming years.
There is currently one Bengali-American in the Detroit Police Academy, which Garbarino hopes to hire.
But the trick is, that officer will likely face good offers from other communities who are also seeking to diversify their police departments.
“That’s the problem,” Garbarino said when it comes to hiring more minorities in the department, “they get snatched up.”