Police crackdown on growing crime wave, with more to come 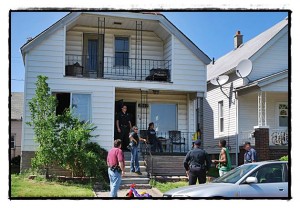 All of you street-partying, drug-dealing Hamtramck people, here’s a belated heads-up – just in case you haven’t already been arrested or heard of it yet:

And for you dipwads who keep your property a mess, squat at a house that doesn’t belong to you, or – worse — subject your children to filthy living conditions … yeah, it’s over for you, too.

On Wednesday, police officers and detectives did what they do best: bust knuckleheads. Thirteen of them for various criminal activities and housing code violations.

In short, it’s been a crazy last two weeks.

But first things, first: On Wednesday, the Police Department assigned several officers and detectives to clean up several so-called “hotspots” in town after City Councilmembers complained about a serious spike in street crimes.

On Wednesday at about mid-afternoon, a squad of officers hit the area of St. Aubin and Lumpkin near Carpenter, staking it out and swooping in on suspected drug dealing activity.

“Ten minutes out of the gate, and we made busts,” said Detective Sgt. Dan Misiak. “We took a zero tolerance approach.”

The busts included five minors who were out on the street and not in school. They were taken into custody for violating the city’s curfew, and their parent, or parents, were also cited for failing in their parental responsibility.

It didn’t stop there.

A group of people living at12116 Lumpkin were found to be squatting and were thrown out. They had illegally tapped into the city’s water service, racking up a bill of $2,900.

Next up, a man on the 2000 block of Edwin St. was finally caught at home and arrested for income tax evasion. He will also likely face child neglect charges. This house stood out among an otherwise well-kept neighborhood. A front window appeared to be broken, and from the street, with the door open wide, a foul odor seeped out. The inside looked dank and dark. 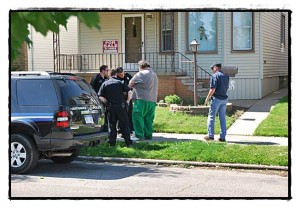 Misiak said officers had previously attempted to arrest the man, but he had been “playing hide and seek.”

Two children at the house were placed in the care of their mother.

So why did the Police Department swing into action on Wednesday?

It all started with the most recent City Council meeting in which councilmembers vented and ranted about a noticeable uptick in muggings, break-ins, street gatherings of youths and subsequent brawls.

And we’re not talking about any garden variety of brawls: we’re talking over 50 young thugs throwing down, according to City Councilmember Catrina Stackpoole.

This story doesn’t start out pretty, but then again, how could it?

Yet, for those who have lived here and experienced the Hamtramck experience, it’s an all too familiar refrain: Where are the police?

That was the rant at last week’s council meeting.

It was actually Councilmember Cathie Gordon who revved up the discussion, saying that there is a rampant crime wave happening in the St. Aubin-Commor area.

Things are about to change, though.

Through the Weed and Seed program here in town, a citizens patrol is up and running. The Site Director, Barbara Stachowski, said the extra eyes and ears on the road should produce some dramatic results.

“You’ll see a big difference this summer,” she said.

9 Responses to Police crackdown on growing crime wave, with more to come