Police expect to charge suspects in murder today or tomorrow 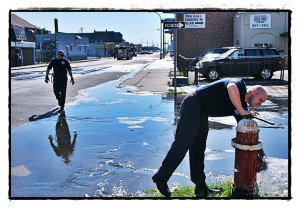 Firefighters finish up washing down Conant Ave. Saturday afternoon where a 24-year-old man bled to death after being slashed in the throat.

Hamtramck police were forced to release four male suspects today (Oct. 11) who were being held in connection with the murder of a 24-year-old man early Saturday.

Police say Joseph King, who lived in Detroit near the Hamtramck border, bled to death after being slashed in the throat while at Conant and Trowbridge at about 3 a.m. Saturday.

The four suspects had left Small’s Bar when they encountered King, police said. Police say a fight broke out that involved knives. Police would not comment on how the incident started.

The suspects were released because by law they have to be charged with a crime within 72 hours of being arrested.
Police say there was a delay in getting charges filed because the Wayne County Prosecutor’s Office was closed Monday for Columbus Day.

Detective John Aiello said he expects to have arrest warrants either later today (Oct. 11) or tomorrow. He said he could not release the names of the suspects until they are charged.

Police initially said they were investigating evidence that suggested the matter could also be considered a hate crime.
Aiello said that doesn’t appear to be a factor.

“But information could come forward and change our mind,” Aiello said.