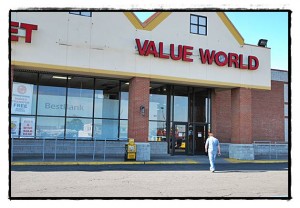 All right hipsters, Value World is now in Hamtramck.

The used clothing chain is located in the same building where Glory Market is at, which is in the strip mall on Jos. Campau and Holbrook.

Lucy Cichanowicz, 81, said she’s overjoyed that the store has located here. Now, she said, she no longer has to arrange a ride to Warren’s Value World. She likes the store because of the quality items and low prices.

“We don’t have enough stores like this in Hamtramck,” she said.

Hamtramck can thank the folks at Glory Market for turning the powers that be at Value World on to this location.

Brian Kose, the City Manager of the chain, said one of the Glory Market owners invited him to take a look at the empty space next to the market.

“At first I didn’t want anything to do with it,” he said. “I thought it was Detroit.”

But he came to find out that Hamtramck is indeed its own city with its own police department and its own building inspectors – two things that Detroit can’t seem to get right.

Kose said his store on Woodward in Detroit is “nothing but trouble” because of poor police response.

When Kose became more familiar with Hamtramck, he said it was indeed a perfect fit.

“You have a lot of people here,” Kose said.

Value World sells used and sometimes new clothing, which represents 80 percent of their sales. Household items make up the rest of the equation.

This store is in a 17,000 square-foot space. A key to the chain’s success, Kose said, is “high volume and low prices.”

You might want to check the advertising circulars that come to your porch. Coupons for the store are worth 50 percent off, and sometimes those coupons are distributed here.

Value World is headquartered in Westland, and has 12 other stores throughout the metro area.