Pot law is far from being wrapped up 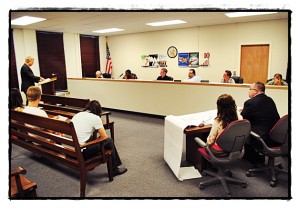 No, it wasn’t a cloud of smoke that caused the confusion. It was the fact that the matter of how to regulate medical marijuana in Hamtramck seemed to generate more questions than answers.

The purpose of the meeting was to give the public a chance to voice their concerns with the ordinance, but it turned out that much of the concern came from the commission itself. However, after a lengthy discussion, ultimately only a few suggestions were made.

At the start of the meeting the public was given a chance to speak on the issue. Although only a few residents were in attendance and only one spoke briefly on the subject, there were a couple of lawyers representing parties interested in opening up marijuana-related businesses.

Among them was Paul Tylenda, an attorney who came to the meeting to congratulate the city on the ordinance and offer advice on how to better write the law. Included in his recommendations were provisions limiting the distance between dispensaries to 500 feet as well as ideas on how to better word certain phrases of the ordinance for clarity.

One of his chief concerns was that the ordinance did not allow for residents to grow marijuana in a residential area – a sentiment that was echoed by many of the commission members. Tylenda said that the language of the law would prevent people from being able to grow medical marijuana for their personal consumption by effectively making it illegal to do so in their own homes.

“We’re not talking about people enacting a home business,” he said in reference to the specific wording of the ordinance. “We’re talking about giving homeowners a chance to provide medicine.”

Furthermore, Tylenda contended that a requirement for dispensaries to provide the city with detailed information concerning their patients would cause not only the aforementioned businesses to be in violation of the Health Insurance Portability and Accountability Act (HIPPA), but the city of Hamtramck as well. That, he says, could lead to a host of problems for the city.

The concerns raised by Tylenda were not lost on city attorney Harry Kalogerakos, who was also in attendance at the meeting. Praising the attorneys and residents who showed up to the meeting, he explained the procedure of how a zoning amendment is passed and stated that the public’s input would not fall on deaf ears.

“These are all issues we’re concerned about, and this is all part of the process,” he said. “Nothing is official until the council makes a vote.”

Before the council makes that vote, however, they too must hold a public meeting. And if this month’s meeting is any indication of how the council discussion will go, let’s just say it isn’t likely to be resolved quickly. After the discussion turned more toward the legal ramifications of the proposed ordinance, members of the commission seemed confused about what kind of action they were supposed to be taking.

“I would think that our role is to comment on the intent of the ordinance and the acceptability of the land use it allows for,” said Commission Chairman Scott Collins.

Seconding that opinion was Mayor Karen Majewski, who agreed that questions of legal matters would be better left to the council and city attorneys.

“It seems to me that the only appropriate comments for us are ones that relate to zoning issues,” she said, “rather than privacy or other issues that the council will address.”

By the end of the meeting, it was clear that the overall biggest concern with the ordinance was that which was initially pointed out by Tylenda – the lack of a provision allowing for residential growth of marijuana. Commissionmember Brent Maxwell noted that the proposed ordinance would require patients to pay a fee to the city in order to purchase marijuana from a dispensary, which he characterized as “odd.”

“I don’t see any distinction between a pharmacy and a dispensary,” he said. “I don’t pay fees to the City of Hamtramck to fill my prescription at CVS, so why should this be any different?”

However, Maxwell did state that “if we don’t regulate it, we can’t get revenue from it.”

The most interesting part of the meeting likely occurred when the actual legality of dispensaries came into question. Under the proposed ordinance, dispensaries would essentially operate between caregivers and patients, which would limit the amount of customers to five per caregiver. Those in attendance said if that were the case it would effectively ruin any chance of Hamtramck becoming a viable place to do business.

More importantly, Tylenda pointed out a loophole in the law that actually makes it legal for a more open and accessible business. According to Tylenda, the protection section of the state marijuana law states that under the law the patient is the superior rights holder, which means they are immune from prosecution for anything that is currently otherwise illegal. Furthermore, his interpretation of the law is that it specifically provides for patient to patient transactions – something that could open up dispensaries for wider distribution.

“In reality, what we’re facing here is that the right to use implies the right to access,” he said. “The law hasn’t caught up enough to regulate access points. You (the city) want to take control of this before it takes control of you.”

A final issue that was brought up was the question of whether the ordinance would stigmatize users of the drug. Along the same lines as Maxwell’s argument that there isn’t a difference between filling a prescription at CVS and getting an allotment of medical marijuana, Mayor Majewski expressed concern over the implications of the ordinance.

“There are all kinds of conflicting messages with this law, and conflicting messages in the culture in general,” she said. “The idea of stigmatizing people who are ill and using a drug that is legal for them to use – I have real issues with that. You don’t restrict a pharmacy (in terms of certain zoning regulations) and stigmatize a person for using it.”

While many of the questions and concerns brought up at the meeting had valid points, few could actually be addressed due to the nature of the meeting. Because it was a Planning Commission meeting, the only suggestions that were ultimately made had to do with zoning issues. When it was all said and done only a few minor changes to building regulations were made. But don’t expect that to be the last you hear about the ordinance.

“It’s better to take control of it now,” said Tylenda, “than to wait around for the state to set up guidelines. The people that care about Hamtramck are the people inside of Hamtramck.”