Primary Election: It’s now the mayor versus a newcomer; millage voted down 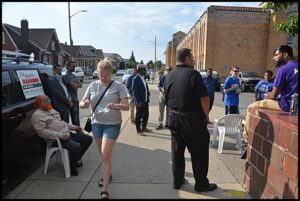 By Charles Sercombe
Mayor Karen Majewski has survived another election challenge despite a harsh social media campaign against her and serious doubt among election watchers about her chances.
Majewski came in second behind newcomer Amer Ghalib in Tuesday’s Primary Election.
Ghalib, who has no experience in city government, beat Majewski by less than 400 votes.
City Councilmember Saad Almasmari was defeated in his bid to become mayor, coming in last in fourth place.
Also, perennial mayoral candidate Asm “Kamal” Rahman came in third.
Both Ghalib and Majewski will now advance to the November General Election to square off.
The city council race was reduced by two candidates, Cody Lown and Armani Asad.
The surviving six candidates will also move forward to the November election where the three top vote-getters will be seated on the city council starting Jan. 1 of 2022.
The top council vote-getter is Khalil A. Rafai, with 19 percent of the vote. The runner-up is Amanda Jaczkowski with 17.5 percent of the vote.
Both are first-time candidates.
Also on the ballot Tuesday was a proposed tax millage to fund the police and fire pensions. Once again, voters trounced the proposal, this time by 82 percent.
The proposal would have allowed the city to levy up to an additional 10 mills on the property rolls. Voters have said that the tax hike is unaffordable.
That rejection, however, could have a rebound effect. If the city defaults on its pension obligation, that could result in a lawsuit, and a court-ordered tax judgment that far exceeds the 10 mills that was proposed.
Insiders say to expect the city administration to ask the city council to try the proposal again for the November election or sometime after that.
A total of 3,934 voters participated in the election, with 2,528
voting by absentee ballot. Election results came in at about 11 p.m., two hours after polls closed.
Tuesday was a picture-perfect day, weather-wise: partly cloudy with mild temperatures and a nice breeze.
Here is a breakdown of how the mayoral votes went:
Amer Ghalib: 1,417, 36.74%
Karen Majewski: 1,053, 27.30%
Asm Rahman: 849, 22.01%
Saad Almasmari: 535, 13.87%

An earlier version of this story incorrectly reported that Councilmember Saad Almasmari had previously run for Hamtramck mayor. He previously ran for State Representative.

9 Responses to Primary Election: It’s now the mayor versus a newcomer; millage voted down