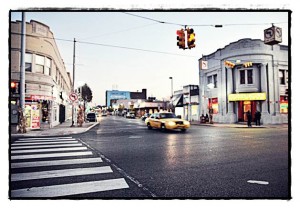 The effort to improve the appearance of downtown Hamtramck continues.

According to Darren Grow, Director of the city’s Downtown Development Authority, progress is being made on the locations selected for the current round of facade grants.

He said the former Citizen Building and Dale’s Party Store are past the first phase of construction, and work is currently underway at MGM Pawn Shop.

Three other locations are currently selecting contractors. The city expects the work to be near completion by August.
However, buildings in need of renovation aren’t the only issue concerning the appearance of downtown.

Jos. Campau, the heart and soul of the city’s business district, has dozens of empty storefronts. The northend, past Caniff, looks like a ghost town to some.

And right smack in the middle of the district sits the empty behemoth of the former Shopper’s World, looking evermore the eyesore with each passing week.

But there could be some good news about the future of the building in the coming weeks, says the city’s Community & Economic Development Department, Jason Friedmann.

Sorry, he said, no hints.

As for empty storefronts, Grow said he’s busy trying “to make as many people aware as possible.”

There’s an old saying in Hamtramck about economic growth: For every two steps forward, there is one step back.
In this limping economy, at least there is still some optimism.