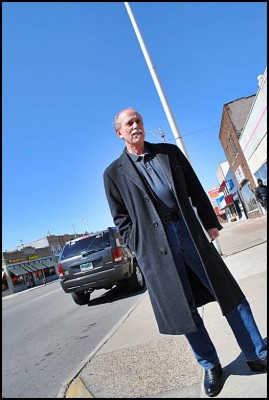 Russ Gordon of the Human Relations Commission is looking to restore 18 flagpoles that line Jos. Campau from Caniff to Carpenter. Once refurbished the flagpoles will display flags from around the world

Hamtramck is often compared to the United Nations. And if Human Relations Commission (HRC) Chairman Russ Gordon has his way, it may soon have the flags of the world to back that statement up.

Gordon, along with HRC Activity Chairwoman Ismira Lokmic, has taken on the ambitious project of refurbishing the 18 flagpoles that line Jos. Campau between Caniff and Carpenter. The flagpoles were first installed during the administration of former Mayor Robert Kozaren at a cost of about $50,000.

Since then, the flagpoles have deteriorated — as have the relationships among community members, according to Gordon — but not to the point where they cannot be repaired.

“Right now there’s a divide in Hamtramck. Our goal is to try and bring people together,” says Gordon. “We want people to feel that when they come to this community, they are part of it.”

In the past, Gordon has tried various ways to bring the community together, whether through block parties, clean-ups, tree plantings or the annual International Picnic on Zinow St.

“I always say, you sweat together you get together,” says Gordon.

With the Joseph Campau International Flagpole Project  — which sort of continues a project to fix the flagpoles that was initiated by City Councilmember Bob Zwolak — Gordon hopes that people will feel welcomed by seeing the flag of their home country.

So far the project has met with considerable success. At an average cost of $844 to repair each pole, about two-thirds of the estimated $15,000 repair budget has already been raised. Gordon hopes to raise the remaining amount in time to unveil the flags on Flag Day (June 14).

To raise the rest of the cash, the Human Relations Commission is looking for businesses to sponsor the remaining flagpoles. Businesses that sponsor the flagpoles will be commemorated with a plaque placed on the pole.

“It’s a great opportunity to help your business and a good cause,” says Gordon.