Property owner has big idea for small parcel of land 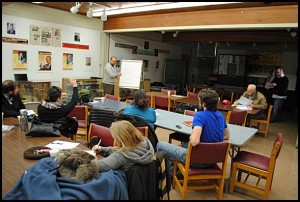 What would you do if you had a vacant lot in the middle of the city? Well, if you’re Oakland County businessman S.N. Syed, you ask the neighbors what they want.

That’s exactly what Syed did last Saturday (Jan. 26) when he hosted a meeting to get community input for an empty parcel located at 2124 Trowbridge. Held at the library, the event brought in about a dozen residents from the area.

At the meeting, Syed introduced himself and explained his vision to those in attendance. It all started when he noticed the property was in the tax foreclosure auction. Being out-of-state at the time he purchased it sight-unseen, only to realize later that it wasn’t salvageable.

“Initially I thought I might be able to use it as a temporary home for people who were displaced, or for some other kind of use for the community,” he says. “Regardless, I knew the location was good and that something could be done with it.”

After it was determined that the house could not be rehabilitated, Syed had it torn down and set about figuring out a new use for the space. He contacted Community & Economic Development Department Director Jason Friedmann, and the two came up with a potential plan for a pocket park designed by community input.

“It was one of the most extensive public outreach endeavors that the department has ever taken on,” said Friedmann. “We sent out over 800 postcards to every resident within a 500-foot radius.”

Though the attendance didn’t quite meet expectations, those who did show up provided valuable insight as to how the land should be used. And in a fortuitous turn of events, it appeared that the desires of residents were right in line with actual, realistic potential uses.

“One of priorities is to have as little maintenance as possible,” says Syed. “I don’t want this to be a headache for the next however many years.”

According to the meeting’s participants, the most desirable use of the land would be to just keep it as vacant green space. The addition of a few benches would provide places for people to sit, and a plant wall of sunflowers would create separation of space. Other than that, there wouldn’t be much else.

At the conclusion of the meeting, the next steps were to create a design, circulate it through the neighborhood and then synthesize the old design with the new input from the community. Once that has occurred, the final steps are to come up with a budget, raise the money and then install it.

“I don’t think it should be too difficult,” says Syed. “By this summer we should have a park there.”