Protestors call for a change in the Police Department 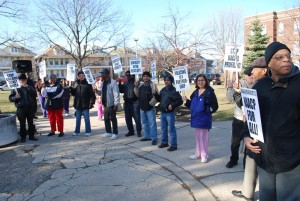 By Charles Sercombe
The arrest of an African-American pastor in Hamtramck has erupted into charges that the city’s Police Department is discriminatory and insensitive to people of color.
Critics of the department say officers were rough in the recent arrest of the Rev. Wayne Little, who they say was innocent of wrongdoing. Hamtramck officers were investigating a possible house break-in when Little approached them.
According to police sources, Little demanded to know what was going on and confronted an officer. Police say Little became disruptive and began pointing his finger in the face of an officer.
Little apparently became upset because his nephew was being detained, police say.
Reached on phone, Little said he could not comment on the matter. Asked why he could not comment, he said it was his “privilege.”
That incident has now blown up to be a rallying point for supporters of the Hamtramck NAACP. The civil rights organization held a rally on Tuesday evening in Zussman Park to talk about “police conduct.”
The Friday before, the city administration held a press conference at Corinthian Baptist Church to talk about the arrest of Little and the growing problem of teens fighting in the streets.
City Manager Bill Cooper would only talk in guarded terms about the arrest of Little. He called the incident a “serious misunderstanding” between Little and the police. Cooper said the arrest underscored “problems” between the city’s ethnic groups and young people. He said the city will require the Police Department to undergo more training.
Rev. Joseph Jordan of Corinthian Baptist Church and Titus Walters, the president of the Hamtramck School Board, have put together a committee of community leaders to address the problem of racial and ethnic tension in the city.
At Tuesday’s rally, attorney Julie Hurwitz recounted past lawsuits filed against the Police Department for racial discrimination.
“The City of Hamtramck is not learning its lesson” Hurwitz said.
Speakers from groups outside the city also spoke of the need to weed out the “bad apples” in the department and a need to make the department more diverse. Out of a department of almost 50, only two officers are African-American.
Police Chief Mark Kalinowski, who has been chief for only a few months, said the make-up of the department is not intentional. He said the department relies on candidates who have already passed the necessary training and tests and who are then screened by a private company.
Critics of the department also say officers are often rude.
The common cry heard at Tuesday’s rally was “the time for change is now,” which is what the Rev. Mike Nelson of the Hamtramck NAACP kicked off the rally with.
Others evoked the treatment of Little with the recent shooting death of Imam Luqman Ameen Abdullah in Dearborn by the FBI. (Abdullah was shot by FBI agents during a raid at a warehouse Abdullah’s organization ran. The FBI says agents shot Abdullah because Abdullah opened fire on an FBI dog that was at the scene.)
A longtime civil rights activist, Ron Scott, said these are “men of God.”
While the rally continued on, Steve Shaya, who works for a city contractor, stood in front of City Hall – across from Zussman Park — holding up a sign that read, “Support police.”
At one point Shaya yelled out: “Respect the law.”
The Hamtramck NAACP also submitted a list of actions for the City Council to take, including: form a citizens’ advisory board for the Police Department, form a citizen voluntary police force, train and hire officer candidates from the city, provide “strong” sensitivity training, stop officers from writing $60,000 worth of traffic fines each month, and agree on a timetable for these actions.
After the rally, the City Council took up the issue of forming a citizens’ advisory board. Councilmember Catrina Stackpoole proposed instead to have the committee of Jordan, Walters and the mayor and city manager form a citizens’ board.
That proposal split the council in a 3-3 tie. Mayor Karen Majewski had to break the tie and supported Stackpoole’s resolution. Those voting against were Councilmembers Cathie Gordon, Kazi Miah and Mohammed Hassan.
After the meeting, Stackpoole said she proposed handing off the creation of a board to the committee because it would have taken longer to create an official advisory board, which would require the creation of an ordinance, a hearing, and perhaps the most controversial part, agreeing on who makes the appointments.