Public schools get a nice surprise 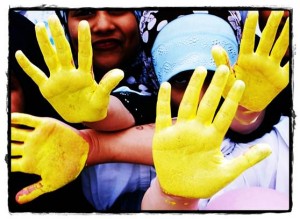 Student enrollment is up this year in the public schools.

Hamtramck Public Schools can breathe a huge sigh of relief.

The district was bracing for a loss of 110 students this school year because of the opening of a new charter school building.
A brand newly constructed school building that is.
As in, modern.

But instead of wringing their wrists over what to do with a cut of $750,000 in state aid because of the anticipated student defection, the district is celebrating an actual increase of 44 students from last year.

The total student headcount is 2,981. The biggest increase in students is at Kosciuszko Middle School.

In state aid dollar value, that comes out to about $300,000 extra for the district.

“I think parents were satisfied,” he said.

Niczay also said that he was expecting a loss of students after closing down Dickinson West Elementary School this past spring and transferring most of the students to the half-filled Kosciuszko Middle School in an effort to stem deficit spending.

The transfer didn’t seem to faze students or their parents, Niczay said. And now, there is an additional cost saving in heating because Kosciuszko School is able to operate more efficiently.

“The school had been partially empty for the past several years,” Niczay said.

There is more good news for the district.

Gov. Rick Snyder has mandated that school districts must meet at least four out of five financial incentives in order to receive an extra $100 per student.

Some of the challenges the districts faced were to make school employees pay at least 20 percent of their medical care costs, as well as consolidate services with other schools or agencies and bid out services, such as maintenance.

The district also has to post an online “dashboard” that shows where the district’s finances come from and where they go.

All of these have been achieved or are about to take place.

That means that if the state agrees the district met the qualifications, another $295,000 will be coming in.

But that doesn’t offset the $470 per student the state took away this year.

While there is plenty to be pleased about, Niczay said the district still faces a $5 million budget deficit.

Ah, but there is good news there, as well. Last year the district was looking at a $6 million deficit.