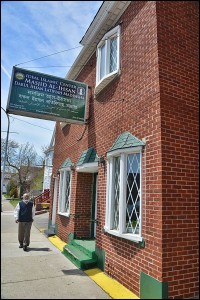 Some seniors at the Hamtramck Senior Apartments complain that the call to prayer broadcast from the Ideal Islamic Center is too loud.

By Charles Sercombe
Last week Detroit public radio station WDET-FM ran a series of stories on Hamtramck.
One of the stories was about the Islamic call to prayer, and how that issue is, according to the headline in the report, is “sounding sweeter” these days.
While the call has not drawn battle lines like it did in 2004, when city officials were contemplating an ordinance to regulate it, there are still occasional complaints about the noise level.
Police Chief Max Garbarino told The Review that most of the complaints he receives are about the loudness of the call from the Ideal Islamic Center at 2721 Holbrook, across the street from the Senior Plaza apartments.
“I’ve talked to them a lot,” Garbarino said.
He added that there is little he can do about the volume because the call to prayer is not covered in the city’s noise ordinance, at least volume-wise. He said that a formal complaint would have to be made to the city council, which could then decide what action to take.
The Imam of the Center, Mohammad Islam, insisted the volume level of his call to prayer is no louder than neighboring church bells.
“We’ve lowered our volume too many times,” Islam said. “Some people are doing the complaining on purpose.”
Carol Marsh, who was quoted in the WDET story, told The Review that the center’s call to prayer disturbs residents in the Senior Plaza taking their naps in the afternoon.
“I can have my window closed, the TV on and go in the bathroom and I can still hear it,” she said.
What disturbs Marsh is that the center allows children to recite the call to prayer.
“But when they start out, they say: ‘Hello, wake up.’ They sound like a joke,” Marsh said.
Islam defended having children perform the call. The center is not only a mosque, it’s also where religious classes are taught to children.
“This is part of the religion we are teaching them,” he said.
Although the call to prayer may not stir much public debate now, the number of mosques opening up in and around Hamtramck has caused protests, but nothing rising to the intensity of the 2004 debates. There are about 12 mosques in the city and in neighborhoods just outside the borders.
Three mosques are located on one block on Jos. Campau and Caniff – the city’s main business district.
The city’s Zoning Board of Appeals has been allowing mosques to set up operation in buildings not zoned for that activity. Commission members have said their hands are tied because of a federal law that they believe prevents cities from barring religious centers.
The newest Islamic center/mosque is located on St. Aubin, a former union activity building for American Axle workers.
Mosques, like any other religious centers, are not required to pay property taxes.