Raymond Wojtowicz: A voice of reason 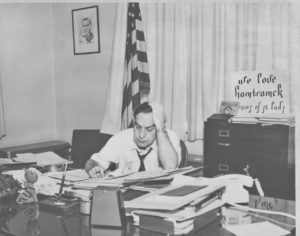 Raymond Wojtowicz, who died Jan.8, was a former Hamtramck mayor and went on to be Wayne County Treasurer for many years.

By Greg Kowalski
“Where did the money go?”
If you were in Hamtramck exactly 50 years ago, you would be familiar with that question. It was the slogan that propelled Raymond Wojtowicz into the mayor’s chair in Hamtramck.
In the winter of 1969-1970, Wojtowicz tapped into the frustrations of many Hamtramckans who were watching their hometown sink into financial ruin.
Wojtowicz, who died last week after serving as mayor and then having a remarkably successfully career outside of Hamtramck, was virtually a political outsider in 1970 when he joined the mayoral race. Elections were held in the early spring back then, with the primary election held in February.
It was a time of tremendous political turmoil in Hamtramck as the city teetered on the edge of bankruptcy, with a common council that was barely coherent, let alone functional.
Wojtowicz stepped into the fray as a voice of reason and responsibility, with a clear vision of the problem — and how to deal with it.
“The first thing we should have is open books,” Wojtowicz said. “For too long, the city has operated in such a way that the public can’t check on how or what decisions are being made.”

Wojtowicz called for annual audits, and for bringing the public into the decision-making process, among other actions.
His comments registered with the city’s voters, and he came in second in the primary election, behind city Treasurer William V. Kozerski.
It was the first time in Hamtramck’s history than incumbent mayor was defeated in the primary election. That was Mayor Joseph Grzecki, Sr., a well-intentioned, dedicated man who was overwhelmed by the city’s list of growing problems.

Meanwhile, Kozerski had outpolled Wojtowicz 2,661 votes to 2,558, and few had expected Wojtowicz to win in the April general election, but Wojtowicz showed just how much the residents wanted a change. Wojtowicz easily took the win, 5,484 votes to 4,103.
“This administration will place the government back in the hands of the people,” Wojtowicz said.
But reality set in before he settled into his office at city hall. As Wojtowicz looked at the books, it was apparent the city’s financial state was far worse than most people suspected.
After barely a week in office, Wojtowicz and the common council were presented with a 15-page document listing the city’s mass of unpaid bills. In all, it contained about 700 items, including DTE and phone bills, that had not been paid since the previous summer. The bottom line was $369,515.67.
But that was just a small portion of the total debt. Taking all the debt into account, the city had a pile of bills amounting to $3.2 million. On top of that, the city was mired in the R-31 Urban Renewal lawsuit, in which the city was accused of using the urban renewal program to oust black residents from the city.
This had drawn the attention of the State of Michigan. In May, 1970, James Marling, deputy treasurer for the state, met with Wojtowicz and the Common Council to review the situation.
Marling was direct: “I have never seen a city in the state of Michigan in such a mess as Hamtramck,” he said.
He then outlined what the city was going to have to do, including producing a balanced budget and laying off at least 125 employees.
That set the tone for the remainder of Wojtowicz’s tenure in office. It seemed that, whatever direction he faced, Wojtowicz found an adversary. The city workers were furious over the layoffs: the common council regularly opposed whatever he proposed, when they did anything at all, and finally became so dysfunctional that four members were recalled, and the state ultimately took over control of the city’s finances.
Even after many difficult decisions had been made and a more reasonable common council installed, Wojtowicz had a tenuous relationship with the adversaries he had accumulated.
In 1973, a new adversary emerged. Former Mayor Al Zak, who had served from 1953 to 1963, said he had been recruited by disgruntled residents to come back.
He had left Hamtramck politics to take a job with Wayne County, but to many residents Zak represented Hamtramck’s Golden Age, when the alleys were cleaner that most town’s main streets.
In the election that year, Zak narrowly defeated Wojtowicz, 4,425 to 4,409 votes.
While that ended Wojtowicz’s service as mayor, he went on to a distinguished 38 years as Wayne County Treasurer.
Wojtowicz was a man who measured his words carefully when he spoke. His actions in Hamtramck show they came from careful consideration.
And while his tenure as mayor was short, he proved to be a voice of reason at a time when that was sorely lacking.
Jan. 24, 2020