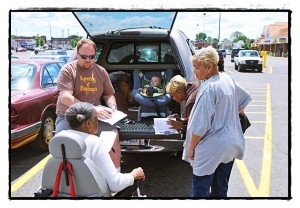 If Hamtramck voters are any indication of what voters in the state are thinking, Gov. Rick Snyder may be out of a job in the coming months.

On a recent Saturday, a petition drive against Snyder was held in the Hamtramck Town Center strip mall, and there was no shortage of people willing to sign it.

Christina Allen of Detroit stepped up to sign a petition, sayings she’s upset that Snyder is cutting social programs and financial aid.

“He’s not doing anything to help the people,” she said. “He’s taking away things people need.”

One of the local organizers of the recall drive, Chris Cornwell, said he was pleasantly surprised that many of the people signing the petition were well informed about Snyder’s budget proposal, especially something as obscure as cuts in state revenue funding to cities.

“One guy called it blackmail, that you can’t blackmail a city,” Cornwell said.

An elderly woman told Cornwell that she’s upset that her pension will be taxed.

Other voters are upset over the new emergency financial manager law that allows EFM’s to rip up union contracts, which critics say is a blatant union-busting move.

Over at Glory Market, two off-duty Hamtramck police officers said that in within an hour they had collected about 100 signatures.

“We’re going to do this again,” said officer Brian Misiak.

State organizers of the recall drive, Michigan Citizens United, aren’t saying how many signatures have been collected so far because of security concerns and the fact that there are so many petitions being circulated it’s impossible to get an accurate count.

Petitions must be turned in by Aug. 5.

Although about 800,000 valid signatures of voters are needed to force a recall election, political observers say more than 1.1 million signatures will have to be collected to make sure there are enough valid ones. 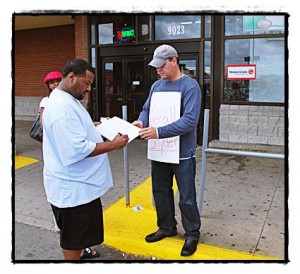 One Response to Recall drive against Snyder finds plenty of takers