Recreation spends $52,000 on new restrooms but good luck using them 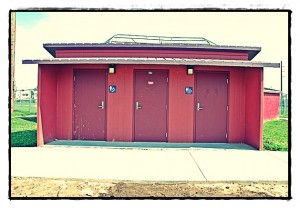 Let’s say you are at Keyworth Stadium, practicing soccer or running some laps. Or, maybe you’re at the basketball court a short way over from the stadium. Or, maybe you and some buddies want to play some baseball at Playfair Field nearby.

And during your visit you find you have to go – really go – to the bathroom. First place you’d likely head to are the new restrooms recently installed next to the baseball field.

You better be able to hold on though because chances are the new restrooms will be locked.

And if you didn’t know it already, the only other place to relieve yourself would be at two bathrooms located on the side of the administration office in the same complex where the stadium is located.

Problem is, however, if you don’t already know about those bathrooms you would be in a jam because there is no signage for the bathrooms. So, if you really have to go, you are out of luck.

What’s the deal with the brand new restrooms installed next to the baseball field?

Hamtramck School Boardmember Hedy Shulgon says that’s not so. She said the restrooms are rarely open to the public.

Daniels spoke with The Review on Tuesday at around 5 p.m. — twice informing a reporter that he was calling back even though he was on vacation. (At one point, he said: “You don’t seem to care that I’m calling while on vacation.”)

That’s the interview where Daniels said the restrooms were open during the day. After the interview, a reporter went to Playfair to check it out.

The restrooms were locked.

In fact, the restrooms were locked the next morning (Wednesday) during the Recreation Department’s annual “Junior Olympics” being held in Keyworth. At least they were at 10:30 a.m. when a reporter checked. (The games began at 10 a.m.) Daniels was at the event.

On Tuesday, recreation staffmembers at the park said the restrooms are open only during scheduled baseball games and that they don’t have keys to the facility.

The staffmembers said there are bathrooms for the public on the side of the administration building.

Those bathrooms, neither of which were marked for men or women, had ugly stains on the walls and floors and generally looked dingy.

School Boardmember Hedy Shulgon said she wants to know why the new restrooms are rarely open for use.

“It seems too limited,” she said about the hours of operation. “I don’t know what it was built for.”

The restrooms are the second project by the Recreation Department this year to come under questioning. In June, a splash pad that cost taxpayers $115,000 was opened in Pulaski Park.

Daniels told the School Board that the hours are limited because he wants a lifeguard on duty during operation.

Many communities are moving to open splash pads as opposed to pools to cut down on staff costs and reduce safety risks.

The Recreation Department is funded by a voter-approved property tax. In recent years, the department has collected $1 million a year from tax revenue.

One Response to Recreation spends $52,000 on new restrooms but good luck using them