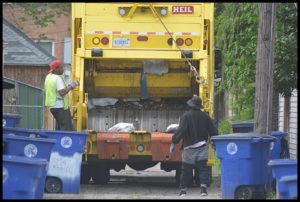 Hamtramck has a new sanitation contractor, and also a permanent recycling drop-off center.

By Charles Sercombe
You may have noticed new, banana-yellow garbage trucks cruising the alleys and streets recently.
City officials sped up the process of bringing on a new company, after numerous residents complained that the former contractor, GFL, was not picking up their household garbage on a regular basis.
The city’s new sanitation company, Priority Waste Holdings, is also brand new to servicing communities.
The service was put out for bid a couple of months ago. Four companies submitted bids, with Priority coming in as the low-bidder by about $20,000.
The contract is worth almost $800,000 a year.
There is an added benefit to the deal.
The company will also have recycling bins available for the public, open around-the-clock and seven days a week.
A ribbon-cutting ceremony for the bins will be held this Monday, at 10 a.m., located just east of Conant at 3900 Christopher St.

“This is an exciting opportunity, because we will no longer have to save our recyclable materials in our kitchens and garages for a month; we can go to drop off plastic and paper anytime that is convenient” said Recycling Commission member Sarah Terrien, in a city-issued press release.
Mayor Karen Majewski added, “We are grateful for the support of the commission, students and our volunteers who assisted in making this transition from the monthly drop off to this new location in our city a success.”
The public can drop off the following items: paper, cardboard, and #1 and #2 plastics.
While the company is new to offering household trash collection, the company has several experienced executives who have been involved in companies that performed household collection, said City Manager Kathy Angerer.
There was some initial concern about hiring the new company, because it will be operating a transfer station on the other side of its location on Vincent St.
City Council candidate Robert Zwolak said he’s concerned about trash being stored there. That’s not the case, though, said Angerer.
Only construction waste will be dropped off there for sorting, Angerer said.
June 28, 2019