Redefining empty space as a concept of art 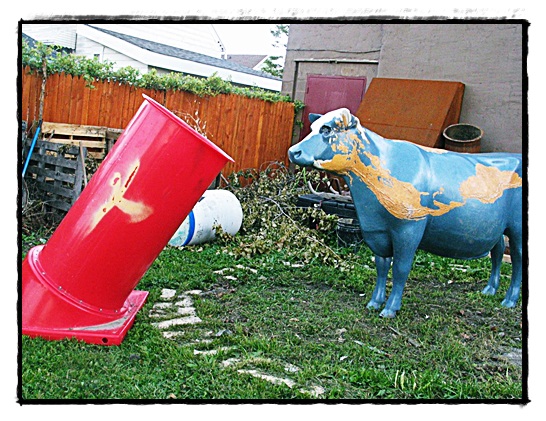 From the roof of their building, looking past a yard below filled with curious made and found objects, multicolored flower and vegetable gardens, Faina Lerman and Graem Whyte have a rather spectacular view — of the future.

Whyte is atop Popps Packing, a large former commercial/light industrial space on the northwest parameter of Hamtramck, looking across Carpenter Street and pointing at eight empty wooded lots. The space looks lush and vibrantly green on a cloudy June afternoon. Peaceful. Pastoral, even.

“I see an orchard there, and a sculpture garden,” Whyte says. “I want to do it. I’m looking into it. Mitch and I have talked about it.”

When Whyte says “Mitch” he’s talking about Mitch Cope, who, along with Gina Reichert — his art, design and marital partner — have stimulated a rethink of what neighborhood and community is, and what it can be.

One of the curious objects below, a modified boat renamed the Heartland Machine and exhibited at museums and galleries across the country, was created by Cope. He and Reichert live about 10 blocks east and a couple blocks north of where we’re standing. The famed Power House Project and the “$100 House” is within easy walking or biking range. That’s how we’re measuring distances.

How far is this location on foot from Hamtramck’s commercial center, Jos. Campau; its newest ethnic retail strip, Conant (aka Bangladeshi Avenue); or two other nearby high quality, experimental art spaces, 2739 Edwin and Public Pool? How long will it take on bicycle to get to the Cultural Center, downtown, Corktown or Southwest Detroit from here?

“I see us all being linked in these simple ways,” Whyte says. “There’s creative energy and activity in all these places. We just need to make those connections happen.”

This story was to be about an art gallery, which Popps Packing surely is. But only four times a year. And its shows are hardly typical of what conventional art galleries are supposed to be. The spring show in May, called The Golden Casket of Earthly Marvels, featured a hot air balloonist who worked with degradable materials that would not trash the environment once it was set into flight. When it was, it hung anxiously for a bit behind some trees on McPherson St., on the Detroit side of Carpenter, before disappearing from sight.

There were dancers who used spidery miniature LED lighting in their otherwise pitch black performance. It was an interactive show, with one of the costumed dancers pulling me, and dozens of other adults and children, into a rectangular structure made of see-through fabric of some kind. We all glowed in the dark, changing the texture of the living installation before the eyes of dozens of people watching the show.

If this were California, Colorado or Oregon, this all might have had a dedicated raver or techno-hippie vibe attached. But it didn’t. It felt like Detroit, which tosses off cultural stereotypes as banal and extraneous, where people are just people doing their thing, oddly but unselfconsciously.

“The word I’d use is ‘genuine,’ Lerman says. “The art scene here is not out to impress anyone. It’s rough around the edges, but it’s a breeding ground for creativity.”

Couples with young children, fledgling and experienced artists and writers (Cope, Jim Boyle, Mary Trybus, Scott Hocking, Meghan McEwen, Steve Hughes, Gretchen Kramp, Mike McGillis, Martin Anand, Jennifer Paull, Michael Jackman among them) mingled or paired off around the Heartland Machine; a sculptural blue cow with a map of the world painted on it (a collaborative effort between Whyte and Hocking); an inverted pyramid sided with aluminum about 10 feet underground (another Whyte-Hocking collab); and two giant microwave emitters that were found in Ann Arbor and brought back in a truck one long haul at a time. The objects, which look like if they were properly launched they could orbit the Earth, appear unwieldy and hard to manage. Though Whyte says: “not really. They’re only about 150 pounds each. It wasn’t that difficult to get them here.”

So, yes, definitely, maybe, Popps Packing is an exhibition and performance space. But it is much more than that. It is a home and work space for Lerman and Whyte, who use the 4,700 square feet building to full advantage.

The artists have independent studios on either side of the building, which faces St. Aubin and once was, in fact, a meat packing plant and later a cookie factory. There is a kitchen and adjacent raw living room with tables and couches in between, with a bedroom loft above. The second floor is currently empty, but ideal for use as another live/work space. They bought the property in February 2007.

“We didn’t know exactly what we wanted to do with it,” Whyte says. “It has been evolving organically ever since.”
Whyte, 39, is a sculptor and fabricator whose credits stretch back to the 1990s, when he began working as a draughtsman for local firms, then began designing and building large-scale indoor and outdoor pieces in Detroit and Los Angeles. He’s shown his metal and woodworks — including furniture — at area galleries since 1999. In December 2004, Whyte started This Week in Art at Motor City Brewing Works. He did it every Wednesday for four years, building a waiting list that was a year-and-a-half long, making it arguably the most successful revolving art residency ever in Detroit. Whyte is part of a group show opening this week (July 17) at 2739 Edwin and has a solo show on his 2011 calendar at Re:View Contemporary in Midtown.

Lerman, 35, who was born in Latvia and moved to the U.S. in 1980, got her BFA from the College for Creative Studies in 2004. Along with Bridget Michael she’s part of the performance art duo Tzarinas of the Plain. She had work in the recent Nocturnal Translations show at Public Pool and at Popps Packing first show in 2009. That show also included work by Nina Bianchi, Ben Hernandez, George Rahme, Sioux Trujillo and a garden installation by Hocking and Whyte.

In the three years since they launched Popps Packing, Lerman and Whyte have witnessed changes, on the ground and in the air, in Detroit’s cultural trajectory.

“People are staying here to work and live for the right reasons. They are doing it for family, for love, for community,” Lerman says. “And we’re meeting more people from all over the world who come here and just get it.”

Whyte says that Detroit space — both physical and ambient — might be its greatest resource.

“We have so much space in the city, I think a lot of artists are now helping to define that space differently, and create something that didn’t exist before,” he says. “We set up Popps Packing on a laboratory model. But that’s the way we see the whole city, really.”

(This story was originally featured in online Detroit magazine Model D. Find it on the web here: http://www.modeldmedia.com)