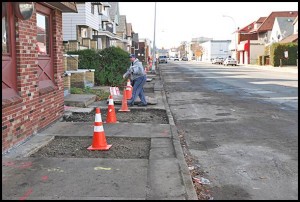 Acting City Manager Kyle Tertzag, recently rejected all bids for an upcoming citywide sidewalk repair project because the bids looked suspicious. The project has been re-bid out.

A major citywide sidewalk repair project took a stumble before it could even start.

Acting City Manager Kyle Tertzag rejected the only two bids received for the project because they looked suspicious. Tertzag said the two bids, one from Wallace Cement Co. of Shelby Twp. and the other from DeBuck Construction Inc. of Utica, were handed in at the same time by one person to the City Clerk’s Office.

The Review received copies of the bids through a Freedom of Information Act request.

The two bids were in identical envelopes with identical address labels and had identical fonts, font size and font color.

Another red flag was raised, Tertzag said, when both bids were notarized by the same person on the same day.

Tertzag said it appeared to him the two supposed competitors had colluded in some fashion.

“I felt there were too many similarities between the two bids,” Tertzag said.

Asked if he contacted investigative agencies to look into the matter, Tertzag declined to comment. However, it is known that the FBI is currently looking into other matters involving contractors and their invoices.

The Review called both companies for a comment and was able to reach John Wallace, the owner of Wallace Cement Co. He vehemently denied there was collusion or any wrongdoing.

“I think I’m being set up by someone,” Wallace said.

Wallace admitted that he dropped off both bids, and that he used the services of a secretary who works for DeBuck. The secretary also notarized the two bids, Wallace said.

Wallace said that while it may appear suspicious, he said he has worked with DeBuck for years.

“There is no law against having the same person notarize the bids,” Wallace said. “We both use the same secretary.”

Ray Debuck, the president of DeBuck Construction, could not be reached for comment. His attorney, Steve Vitale, told The Review to stop calling his client.

Vitale said that any allegation of collusion would be “ludicrous.”

“Ray has been an honest business person for many years,” Vitale said.

Vitale declined to comment on the bids being delivered by Wallace and notarized by the same person.

Vitale also declined to respond to what Wallace said.

“I haven’t spoken to him,” Vitale said.

Wallace said that someone from the FBI called him but he has not yet spoken to the agency. He said his attorney is handling the matter.

Wallace also lashed out at Steve Shaya, the Director of Hamtramck’s Department of Public Services. He said it was Shaya who called him to submit a bid.

Wallace said that when he attended a meeting for potential contractors to review the project and ask questions, the only other companies there were DeBuck and Platinum Landscaping.

As it turned out, Platinum, a contractor for the City Of Hamtramck that performs lot clean-ups, did not submit a bid for the project.

Wallace said he came to learn that Platinum is not a cement company.

When he was told that Shaya was a former employee of Platinum and is now serving as Director of Public Services, Wallace said: “That’s a conflict of interest.”

“Something is super funny somewhere,” Wallace added. “Does he (Shaya) just pick and choose who to call?”

Shaya said that Platinum sat in on the meeting because the project will involve removing trees that have caused some sidewalks to buckle.

Shaya said that since Platinum is the city’s contractor to remove trees, it made sense to have the company attend the meeting for cement contractors.

“He (Platinum) was just there as a tree company,” Shaya said.

As for contacting contractors about requests for bids, Shaya said he doesn’t normally call contractors but since the project was so large “we wanted to reach out to bigger guns.”

Wallace Cement was hired for the recent sidewalk repairs throughout the city. DTE Energy ripped up hundreds of sidewalk slabs to replace gas lines and is responsible for replacing them.

Shaya said he does not remember which contractors he called for the city’s sidewalk repair program.

The city advertised for bids on the project in the March 15 issue of The Review.

The city is now advertising for new bids.