Religious centers have no place in Hamtramck’s business zones 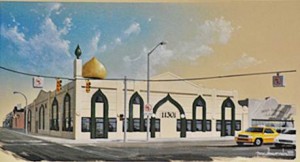 An artist's rendering of a proposed Islamic center at the northwest corner of Jos. Campau and Caniff -- the very heart of Hamtramck's business district.

Hamtramck is losing valuable real estate to religious institutions. A plan is in the works for a mosque to open on the northwest corner of Jos. Campau and Caniff – the very heart of the city’s business district.

There are already two other mosques on the very same block.

Three religious centers on Jos. Campau in a one block area. How in the world did city officials allow this to happen?

Commercial buildings on Jos. Campau should be reserved strictly for businesses. Allowing a religious center to operate in a commercial building means the city cannot collect property taxes.

Hamtramck needs to expand its tax base – not allow it to shrink.

There is also a request to turn a huge building on St. Aubin St. that was formerly used by American Axle into yet another Islamic center.

The Plan Commission has given tentative approval to designate the location of the building from an industrial zone to one that would allow mixed use, including the operation of a religious center.

Have city officials totally given up on attracting economic development? Where is the leadership in this city?

City officials say their hands are tied because of a federal law call the Religious Land Use and Institutionalized Persons Act.

It’s the opinion of local officials that the law forbids communities from restricting religious centers from certain zones.

That’s their opinion. Others, such as the Newcomb Law Group, say that was not what the law means and that cities can indeed prohibit religious centers from certain zones, such as commercial zones.

Again, where is the leadership in this city?

Proponents of the St. Aubin Islamic Center claim that it will attract people to move into the city and set up businesses.

If that’s true, then Jos. Campau from Caniff to Holmes should be booming with people and businesses. That’s where two Islamic centers are located. But guess what? There is nothing going on there.

There is a place for religious centers, and we welcome them to settle in Hamtramck.

But not in our commercial and industrial zones. We need to boost these zones with businesses that will bring in tax money.

Perhaps this development of religious centers locating in commercial zones started with Acts 29, a religious group, being allowed to set up in a former auto dealership on the northend of Jos. Campau.

This is just poor economic development planning, and we as a city need to undo these horrible decisions.

Hamtramck is being denied economic development. Our so-called city leaders have failed us, but that doesn’t mean we have to live with this vacuum of leadership.

What in the world were city officials thinking?