Renovate it … but will they come? 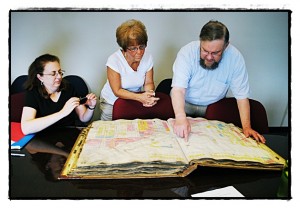 Something strange happened at last Tuesday (July 13) night’s city council meeting – everyone agreed on something.

At least, that seemed to be the sentiment after an informational presentation was given by baseball author and historian Gary Gillette concerning the grandstands at Veterans Park.

What everyone appeared to agree upon was the fact that there should be something done to restore the grandstands to working order and preserve a piece of Hamtramck’s history that has long been forgotten.

During Gillette’s convincing address to the council, he highlighted many important reasons for rehabilitating the grandstands – the most significant being the fact that it is one of only five remaining Negro League home ball parks in the United States. Moreover, because of the fact that only one other park is in functional condition and the other three will probably be torn down, it will likely be one of only two remaining parks in the near future.

“I guarantee that if you preserve this stadium it will be a national story,” he said.

In addition to the extra business brought into town through baseball tourism, Gillette said that restoring the stadium would also create other benefits as well. Citing the growing movie industry in the state of Michigan, he said that it would be likely that the city could rent out the site for period pieces, as is the case of historic Rickwood Field in Alabama, which is frequently used as a set in movies.

Furthermore, Gillette added that a restored grandstand could provide a venue for outdoor concerts and other events. This could potentially bring in even more additional revenue to the city, as people who come into the city for a concert would likely stick around for the rest of the night.

At the conclusion of his speech, Gillette was thanked by Councilmembers Cathie Gordon, Catrina Stackpoole and Kazi Miah. Gordon applauded him for his effort and said she had fond memories of the grandstands as a child.

“If we could make this happen I would be a very happy lady,” she said.

Mayor Karen Majewski agreed with Gordon, saying that she thought preserving the grandstands made sense given the intersection between the city’s decision to move forward on a historical museum and an overall growing trend in cultural tourism. She said that she would do everything she could to see the project through, and that with the possibility of the available funds through tax credits and other programs which were mentioned by Gillette in his speech, preserving the stadium could be a fairly feasible task.

“I think this is a fantastic and incredible opportunity for us in a lot of perspectives,” she said. “I honestly don’t think we’ll have a lot of problems getting this through.”

A week later, things were beginning to move forward. Majewski formed a special committee to work on the project, which met for the first time on Thursday (July 22). The committee discussed the process of registering for historical designation as well as how to prove the site is in fact as historical as it is believed to be.

One way to determine the true history of the stadium is to find a photograph of the site from before 1941. This picture – the “smoking gun” – would authenticate once-and-for-all whether or not the current grandstands are the original grandstands. But another way that may help determine the history is to look back at the construction records and permits of the stadium, a task that City Manager Bill Cooper has given to Department of Public Works Director Marty Ladd.

“Since it appears that somewhere in here the County Road Commission had something to do with this, they should have some documentation. If they were building something they’re going to have some architectural engineering drawings,” he said. “Now, whether or not they can find it is another issue.”

After the site’s history can be determined, the next step is to apply for a historical designation. Hamtramck resident Rebecca Binno Savage, who was formerly the Chairwoman of the Downtown Development Authority and has been involved in numerous proposals for historical designation, said that there were two key components needed to make the application. The first is a statement of historical significance, which Gillette agreed to help write, and the second is a physical description of the current site, complete with black-and-white pictures that meet certain specifications.

During the meeting, a few interesting discoveries were made while looking at an old Sanborn Map (which was originally created for the purpose of to assessing fire insurance risk) of Veterans Park. Gillette found that the map included the dimensions of the original outfield fence, which could potentially prove the site’s history. By using the dimensions of the field as described in old news articles, there is a possibility that the current dimensions of the field can be matched, establishing a link between the past and present. Gillette says he believes pieces of the fence could be found with a little digging.

The other discovery made while looking at the Sanborn Map was that one of the old buildings next to the grandstands may in fact be part of the original stadium –maybe even a players’ clubhouse. Were that the case, it would only add to the site’s already significant history. But regardless of that detail, it remains clear that the rest of the site is more likely than not original.

All that’s left is to prove it.

Ian Perrotta can be reached at ian@thethehamtramckreview.com

3 Responses to Renovate it … but will they come?