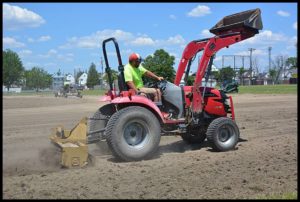 The field at Hamtramck Baseball Stadium is being replaced.

By Charles Sercombe
Hamtramck’s historic baseball stadium is about to undergo a historic change.
Last week, contractors began tearing out the old turf and infield to make way for a brand-new field.
Work will also begin on making repairs to the stadium.
By perhaps fall, it will be a reborn stadium.
The stadium is considered historic because it is only one of five stadiums built specifically for the old Negro League Baseball.
It was built in 1930, and was home to the legendary Detroit Stars. This was at a time when African-Americans were not allowed to play in the whites-only Major League Baseball.
The color line, at least in modern times, was eventually broken in 1947 when the former Brooklyn Dodgers hired Jackie Robinson. The Boston Red Sox was the last team to integrate in 1959.
The history and significance of Hamtramck’s stadium had been lost for decades. It wasn’t until several years ago that its importance was discovered.
Up to that time, various city officials had called for tearing the stadium down because it was dilapidated and had become an eyesore. Once its historical background was discovered, it became a whole new ball game.
Various city officials wasted no time in applying for grants to fix up the stadium.
For the past few years, a volunteer group called the Hamtramck Stadium Ground Crew has been maintaining the field.
Old-timey baseball games – where the players play bare-handed – have been presented at the field. The stadium even received rock star attention last year, when Detroit rocker Jack White hosted a baseball game. He also donated $10,000 toward the stadium’s renovation.
In the meantime, the grant seeking has been paying off. Money from donations, from the state of Michigan, and from various organizations has been steadily coming in.
There is hope for the city to win a multi-million-dollar grant from the Ralph C. Wilson, Jr. Foundation.
Tom Derry, who is part of the Ground Crew, summed up the expectations of many when he said on his Facebook page:
“Can’t wait until we hear the umpire cry, ‘Play ball!’”
Posted July 10, 2020