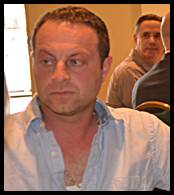 By Charles Sercombe
A contractor for the City of Hamtramck is suing Review Publisher John Ulaj and the newspaper for defamation.
Omar Nakash, the owner of Platinum Landscaping, Inc., has filed a lawsuit in Wayne County Circuit Court accusing Ulaj of defaming him during Ulaj’s run for mayor in 2013.
Nakash is seeking over $25,000 in damages.
In his suit, Nakash said Ulaj said at a July 19, 2013 candidate forum that Platinum is “ripping off the city,” and he would fire the company if elected.
Ulaj’s comment was also printed in a story about the forum in the July 26 issue of The Review.
Nakash said he was further defamed when Ulaj told former City Councilmember Cathie Gordon and resident Hillary Cherry that Nakash is a “crook.”
Ulaj said the lawsuit is “frivolous” and will defend himself and the newspaper.
Asked why Nakash waited 11 months to file the lawsuit, Nakash’s attorney, James McGinnis, told The Review:
“This was when his (Nakash’s) decision was made.”
The lawsuit was filed June 9, two weeks after The Review filed a Freedom of Information Act request for a copy of Platinum’s new contract with the city. The city turned down the request, saying it had not yet been OK’d by state officials.
As of last week, the contract has still not been authorized. In the meantime, Emergency Manager Cathy Square said Platinum is still providing services to the city.
Platinum Landscaping clears lots for the city as well as provides snow plow and salting service for the city. Last winter, the company was paid $600,000 for clearing and salting about a dozen streets, a few city parking lots and clearing side streets one time in part of the city.
Prior to that, the company was paid $1.8 million for its services for over a two-year period, according to invoices The Review obtained in a Freedom of Information Act request in 2012.
Reached by telephone, Gordon at first denied saying she told Nakash that Ulaj called him a “crook,” but then she said:
“I may have said, ‘Johnny thinks you’re a crook.’ I may have said it in passing.”
Gordon, who was also a candidate for mayor and at the candidate forum Ulaj attended, said she did not know she was in Nakash’s lawsuit.
Cherry, who runs a local blog on the city called “Hamtramck Star,” told The Review she has “no specific memory” of hearing Ulaj say that comment.
She also said she was unaware she was named in the lawsuit and said she does not talk with Nakash.
Ulaj lost last year’s mayoral election, coming in third place. Gordon came in last place, behind Ulaj. Mayor Karen Majewski went on to square off against former Councilmember Abdul Algazali and won a third term in the November election.