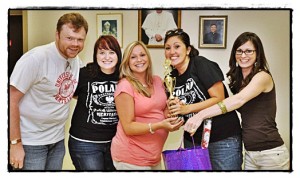 As part of the effort to raise money for the upcoming Hamtramck Labor Day Festival, two separate events were held. On Saturday (Aug.7) The Review hosted a fundraiser (see story on front page) and on Sunday (Aug. 8) the Festival Committee put on Hamtramck’s first Road Rally in years.

For anyone unfamiliar with a Road Rally, think of it as a scavenger hunt throughout the city. Contestants are given a bag full of clues, and based on the completion time and number of correct answers, a winning team is chosen. Christine Bindas, a self-described “puzzle freak” who helped make the clues, says that she feels a lot of people enjoy the challenge and competition of the event.

“I think a lot of people like to figure things out,” she said.

In this particular rally, teams were given 10 separate clues to solve. Each clue was a puzzle in itself and had to be figured out before teams could drive to the destination to solve the actual question, which typically involved answering what could be seen at a particular place. The puzzles that composed the clues were comprised of anagrams, word searches and song and movie trivia, among others.

Altogether there were ten teams that participated in the rally. The winning team – Three Peirogis and a Kielbasa – consisted of Mary Przybyl, Basia Grabas, Nick Nowakoski and Marie Terokowskie and finished in less than an hour. The top three teams were all awarded prizes, as was the team that finished last. Giftcards and other products and services were donated by Royal Kebab, Sweet Marlena’s, Suzy’s Bar, the Polish Art Center, Maria’s Comida and Café 1923.

“It was a hugely successful event,” said Kathleen Bittner, an organizer of this year’s festival. “I can’t wait to do it next year.”