Sale of vacant lots has been profitable for the city 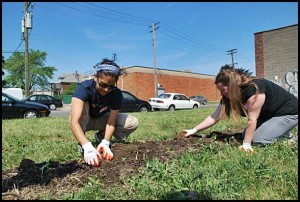 One of the more well-known purchases of city lots was the site of the Hamtown Farms.

By Charles Sercombe
There are no longer lots of empty lots for sale in Hamtramck.
During the past year the city has sold 122 vacant lots and 10 other properties through auctions that have raised over $353,000.
For decades the city had been unable to offload the growing number of lots because of a housing discrimination lawsuit filed against the city.
Settlement terms of that lawsuit required the city to set aside vacant lots for housing development. When a majority of the housing had been built, the federal judge overseeing the case finally allowed the city to get rid of the unused lots it had accumulated over a 30-year period.
The last auction of city lots was two weeks ago when 20 lots were picked up, which netted the city $6,000.
What’s left over is still to be determined because of some confusion over who owns the remaining lots. Some of the lots also have acquired property taxes owed and unpaid water service charges.
When the paper trail on ownership is cleared up, those lots will go to the county treasurer’s office for auction.
“There’s not a ton left,” said Kathy Angerer, the city’s Director of Community & Economic Development.