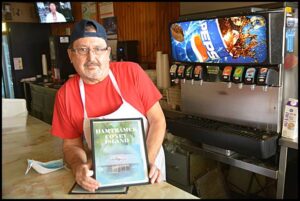 For over 40 years George Gjokoj has manned the grill at Hamtramck Coney. Jan. 31 is the last day the restaurant will be open. Say good-bye to another city landmark.

By Charles Sercombe
This is getting to be an all-too-familiar story lately.
Another iconic Hamtramck establishment is closing its doors at the end of this month.
George Gjokaj has been manning the grill at Hamtramck Coney for the last 46 years.
Forty-six years.
He’s close to 70 years old now, and contrary to a rumor that he is being forced out, he is simply retiring.
“It’s just that time,” George said. “Forty-six years – it’s not a little time, it’s a lot of time. I don’t want to be behind a grill for all my life,” he said, during a short break from a lunch rush on a gray and cold Tuesday.
It’s not known for sure what will happen next for the space, although there are rumors out there.
The restaurant offers an Edward Hopper-esque view of Hamtramck – like his famous “Nighthawks” painting. It’s perched at the corner of Jos. Campau and Evaline, where you can sit at the counter, sip coffee and stare out at the passing world.
At least you could do this pre-pandemic.
As you can imagine, a lot has changed in 46 years. The people, the landscape and the number of customers. Certainly, the coronavirus pandemic has cut into business this past year.
“I’ve seen a lot of things,” George said. “Those days were good. It’s been a blessed place.”
George took over the coney in 1985 and renamed it from “Joe’s” to “Pete’s” – in honor of his brother.
Originally, it was known as Onassis, which has been there since 1967.
George changed the name once again, this time to Hamtramck Coney, after his brother died.
He figures he’s sold about a million coneys in his time. He laughed before saying that – so in other words, who knows?
Back then, George was selling 600 to 800 coneys per day. When Chrysler had an office in Highland Park, right next to the Hamtramck border, they’d order 100 for lunch just for themselves.
Toast of the Town was a regular back in the 80s, when the Who’s Who of Hamtramck would still pack the place. You’d see all types – sometimes local media celebrities, or some guy who looked like Santa Claus, or cops, or politicians.
There aren’t too many restaurants from back then that are still surviving. Maybe just the two Polish restaurants on Yemans St.?
Recently, we said good-bye to the American-European Market, which closed its doors a month ago.
Its owners also retired.
We recently have spotlighted the challenges local cafes, bars and restaurants are facing during this coronavirus pandemic – which has no sign of letting up.
Some of these businesses may not survive the severe financial hardships they are facing, and Hamtramck’s nightlife may never be the same.
George is not a guy of many words, and what he does say is kind. As always.
Asked for parting words, he leans on the counter and thinks for a moment.
He chokes up, but plows ahead.
“I had customers cry here today,” he starts out.
He draws a breath and takes a few moments.
“I thank all of them so very much, from the bottom of my heart. God bless them, and God bless Hamtramck,” he finishes up.
Hey, Toast wasn’t fighting back tears.
Toast had work to do. Sure.
Too much history was starting to catch up. I swear I saw an old detective friend over there at a booth, still dressed in the clothes he was wearing at the bar the night before.
A toast to you, George, and thanks for all the humor, warmth, and good food you served up – always with a smile.

When it comes to good food and great times, Hamtramck has plenty to offer. In this column, we’ll talk about what’s happening at our bars, restaurants and at other events throughout the city.
Posted Jan. 22, 2021