School board offers no explanation over superintendent’s absence 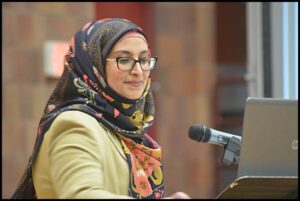 By Charles Sercombe
One of the first things the Hamtramck School Board did to start the new year was to choose who will run the board’s meetings.
It’s a tradition that’s performed every year.
This year, there was a change of leadership, which is not typical.
The new president of the board is Sal Hadwan. Former president Jihan Aiyash was nominated to continue in that role by Daz’Shavon Hall, but Aiyash declined without explanation.
Aiyash cast the sole vote against nominating Hadwan.
Continuing as vice president is Showkat Chowdhury, although both Aiyash and Hall voted against his nomination.
The appointment of the remaining officers went without any objections, and they are: Moortadha Obaid as treasurer and Hall as secretary.
The trustees include Evan Major and Regan Watson.
What wasn’t discussed at the meeting was the status of both Superintendent Jaleelah Ahmed and Michelle Imbrunone, the district’s head of Human Resources.
Both of them took a leave of absence, citing the Family Medical Leave Act, last October. Ahmed was scheduled to return to her position last Monday, Jan. 10.
The Review reached out to Interim Superintendent Nabil Nagi for comment on whether they are returning, or if they are still on paid leave.
He declined to comment, saying he does not discuss personnel matters.
Ahmed did not answer a text message from The Review.
It’s not clear whether if Ahmed and Imbrunone remain on the district’s payroll, or why they have not returned.
The board moved last week to appoint Mujaheed Elhady as Interim Executive Director of Human Resources, taking over Imbrunone’s role.
The silence on the part of the administration and board came under question by local activist Bill Meyer. During public comment at the board meeting last Wednesday, he introduced the topic as “the elephant in the room.”
“Why is there no discussion? Where is our superintendent. … Is it a secret?” he asked.
His questions were met with silence.
Meyer said it appears that Ahmed “is being punished by being criminalized.”
He further criticized the board of “doing a sneaky job” by not discussing the matter.
Again, there was no comment by the board or administration.
Ahmed, the district’s first Yemeni-American to be appointed to that position almost two years ago, and Imbrunone came under heavy criticism from both teachers and administrators over their management style.
A wave of experienced teachers and staff have resigned during their tenure, which has created a critical shortage of staff members.
Posted Jan. 21, 2022