School Board once again faces filling a vacancy 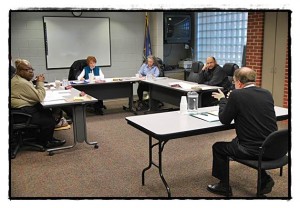 The Hamtramck School Board interviews a candidate to fill a vacant seat.

For the second time in two years, a Hamtramck Public School Boardmember has resigned.

In an email to the board on Wednesday, Nassr Hussain, who was elected two years ago, said he had to resign because “My other commitments have become too great for me to be able to fulfill the requirements of my position on the board, and I feel it is best for me to make room for someone with the time and energy to devote to the job.”

School Board President Titus Walters said that there are number of issues facing the district which requires meeting for more than just the monthly regular meeting.

“Although it’s not a full-time job, you have to be around,” Walters said.

Even before resigning this week, Hussain, the first Yemeni-American elected to the board, was seen little at school affairs outside the regular board meetings. During his two years, Hussain did not attend high school graduation ceremonies.

The board is now accepting applications to fill Hussain’s seat, which will last until next November’s election. The person who wins that election will finish out Hussian’s term, which expires Dec. 3, 2018.

Those interested in being appointed to the position must submit a letter of interest to the school board president by 3 p.m., Jan. 10. Letters can be sent to: Hamtramck Board of Education, 3201 Roosevelt Hamtramck, MI 48212, or via email to: jmcbryar@hamtramck.k12.mi.us.

Interviews are scheduled for Jan. 14.

To qualify, candidates must be at least 18 years old, a Hamtramck resident and a registered voter.

3 Responses to School Board once again faces filling a vacancy