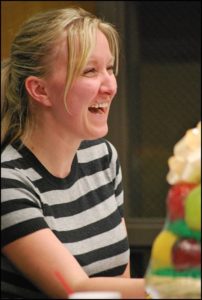 By Charles Sercombe
In an unexpected announcement, Hamtramck School Boardmember Maggie Srodek submitted her resignation.
Srodek, who has served on the board for eight years, many of them as president, said it came down to family.
“It’s been a lot of everything, and not enough time in the day for my family,” Srodek told The Review.
Srodek’s family owns Srodek’s Campau Quality Sausage Company on Jos. Campau, and recently opened a new market in Sterling Heights. Srodek also recently had a child.
At a special school board budget meeting on June 29, Srodek submitted her resignation, which became effective after that meeting.
She told the board that her decision didn’t come easy.
“It pains me, but it is the right decision,” Srodek said.
Srodek has seen the district through its most financially difficult times. At one point, the district struggled to address a $5 million budget deficit.
Through a number of cuts – including privatizing some jobs – the district bounced back, and now has an $11 million budget surplus.
Under Srodek, the district was also successful in getting voter approval for a bond to upgrade and repair schools.
The district is now also seeking another bond to continue with building improvements, as well as to build a new school.
Srodek had nothing but praise for the district, which has a student enrollment of over 3,000, and where over 20 languages and dialects are spoken.
“It’s a one-of-a-kind district,” she told her fellow boardmembers.
Her seat will now be filled by an appointment by the school board. The deadline for candidates to be considered for the appointment is today, Friday, July 10 at 11:59 p.m.
For those interested in the position, you must submit a letter of interest and a resume, by email to:
jmcbryar@hamtramckschools.org
Interviews of candidates will begin next week.
Posted July 10, 2020