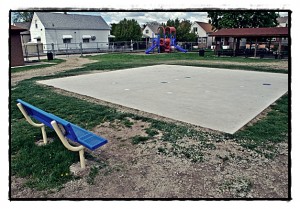 That’s what School Boardmember Heddy Shulgon is concerned about. At last week’s School Board meeting, Shulgon made public a letter from the state Department of Environmental Quality that outlined several concerns involving the recently built splash pad in Pulaski Park.

The Recreation Department apparently did not first contact the DEQ to find out what is required in installing a splash pad. The DEQ is requesting several follow-up actions to be completed before the splash pad can be used.

The Review received a copy of the letter through a Freedom of Information Request. In the letter, Paul Sisson, an Environmental Engineer for the Campgrounds & Pools Unit of the DEQ, said the plans for the “proposed” splash pad were “generally satisfactory” but pointed out additional information was needed.

The letter was dated Dec. 16, 2009. By that date, however, the splash pad was beyond the “proposal point.” It was installed the previous fall.

In an interview with The Review, Sisson said the Recreation Department and its contractor should have known that the DEQ has codes involving splash pads that involve water being recycled for use.

Sisson said he doesn’t know yet to what extent the splash pad may have to be altered. He said it could turn out the pad must be torn up and redone.

Sisson added that he had only “limited” contact with the contractor and that Daniels has yet to respond to his letter. He said the only one from Hamtramck Public Schools to call was Shulgon.

Sisson said that was the last he heard from the contractor about Hamtramck’s plan. He said he sent the district a letter because he was concerned he had not heard back from anyone.

Shulgon said she became aware of the issue when Daniels mentioned a letter from the DEQ during a Recreation Commission meeting. She said she asked for a copy of the letter several times but Daniels refused to give her one.
“My antenna went up when I heard the DEQ,” Shulgon said.

Shulgon said that in light of the tough economic times, “we have to be careful about how we spend taxpayers’ money.” She also said the splash pad is a major health issue for the public because if the recycled water is not treated correctly, the public could become infected with bacteria.

The project cost the Recreation Department $115,853, which was $15,853 over budget, according to a document put together by Daniels giving an overview of projects the department has completed or intends to do.

Sisson said Daniels, as a member of the Michigan Recreation and Parks Association, should have been aware of the DEQ requirements for the splash pad.

When he was asked to answer the question he said, “I don’t have to answer your questions.” He then said “have a good day” and hung up the phone.

After that brief interview, the Recreation Commission president, Dave Olko called to ask what this newspaper was inquiring about. Olko claimed the DEQ “changed the rules” midway through the project.

Sisson, of the DEQ, said that’s not true. He said “from the get go” no one ever contacted his office. He also added that the requirements regarding splash pads have remained the same since 2005.

Before Olko hung up on The Review, he told the reporter to “shove that paper up your f—ing ass” and that he would put the paper out of business. A few days later during a Recreation Commission meeting, Olko remained confrontational, giving a reporter the finger at the end of the meeting and made what appeared to be a physical charge at the reporter. Others in the room restrained Olko.

During the meeting, Schoolboardmember Shulgon asked Daniels several questions about the splash pad but he said he would discuss the matter with the superintendent and said that Shulgon’s questioning was making him “nervous.”

Olko eventually cut off Shulgon, saying she was only an “observer” and could not ask questions.