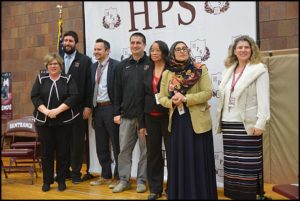 Hamtramck Schools Superintendent Jaleelah Ahmed (second from right) and her administrators at the recent State of the District presentation.

By Charles Sercombe
The Hamtramck Public School District had nothing but good news to report.
School officials, along with the public, gathered last Thursday afternoon at the Hamtramck High School Community Center for the annual State of the District address.
This was the first such presentation under Superintendent Jaleelah Ahmed, who was appointed to her position last year.
She has enjoyed a successful year, to say the least.
The district is still boasting of a budget surplus, which is at $12.2 million. The district’s Chief Financial Officer, Sherry Lynem, pointed out that financial picture is in sharp contrast compared to 10 years ago, when the district was in a financial crisis and had a $5 million budget deficit.
That was due in part to drastic cuts made by then Gov. Rick Snyder, who was combating a statewide economic recession.
The district managed to climb out of that financial hole by slashing the budget, and also due to teachers and staff members taking deep salary cuts.
Today, the financial picture keeps getting better. Gov. Gretchen Witmer increased per pupil funding by the state by $240. However, Hamtramck receives the lowest amount of state aid, at $8,111 per pupil.
That will continue to increase in the 2020-21 school year by another $225 per pupil.
The district has about 3,500 students – a number that has continued to increase in recent years.
There is one more huge financial goal the district is about to embark on: Asking Hamtramck voters to approve a 7-mill bond, to pay for extensive renovations to the district’s existing buildings, and to actually construct a new school building on the grounds of Kosciuszko Middle School.
The bond, if approved in a special May 5 election, would continue for about 30 years. It has been estimated by the school board that the cost to the average homeowner would equal an extra $200-$300 per year.
If that sounds like an impossible task to get voter approval for, remember several years ago that voters OK’d a bond to begin needed renovations at the district’s buildings, which had long been neglected in maintenance.
Superintendent Ahmed made it a point that Michigan is one of 12 states where the state government does not supply districts with funding to make building repairs.
She said that creates an “equity gap” for districts, and puts many districts at a disadvantage – especially those in low-income cities where property values are depressed.
The proposed three-story school building would allow the district to remove the portable classrooms on the school’s site, which were purchased several years ago in used condition, and were supposed to be temporary.
Several of the district’s administrators also made presentations about the strides their departments are making.
The district’s special needs program, in particular, has been greatly expanded.
Feb. 28, 2020