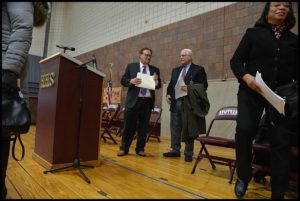 By Charles Sercombe
Over the past 15 years, public school districts in the state have seen financial funding drop by 30 percent.
That was the bad news recently presented at the annual State of the District Address for the Hamtramck Public Schools.
The good news is that the district still boasts of a budget surplus, this year sitting at $9.8 million.
“We’re doing very well,” said District Chief Financial Officer Sherry Lynem.
The district’s yearly budget is $45 million, and so far, the district has been able to keep costs down. Salaries and benefits eat up the biggest portion of the budget at $28 million.
But the president of the Hamtramck Public School Teachers’ Union, Michelle Cook, said per-pupil spending, which comes from the state, needs to be increased by a little over $1,000 for each student.
The district now receives $7,871 per student, Cook said.
In Hamtramck, the per-pupil dollar has to stretch much further.
That’s because the majority of students speak and read English as a second language, and also many are from low-income families.
That places more strain on teachers, and stretches the district’s resources.
To meet the district’s needs, Cook said, per pupil spending should be at $9,000.
The district may see some spending increase. Recently, newly-elected Gov. Gretchen Whitmer announced she is going to increase per pupil funding by $180 for each student.
Hamtramck has a student enrollment of 3,300.
Besides a brighter financial picture, the district is about to take part in a program that will perhaps be the envy of other districts.
For students, it’s going to be a once-in-a lifetime gift.
The district is entering into a partnership with Detroit schools in offering a free trades program.
The program will be open to 30 students per year for the next three years.
Participating students will be immersed in a training opportunity that will offer training in their choice of one of these skills: electrical, plumbing, HVAC, masonry, or welding.
Sharon Strean, the district’s Curriculum Facilitator, said by the end of the program, students will be able “to walk out of there and get a job.”
Schools Superintendent Tom Niczay, who is retiring at the end of this school year, said he has been working with the city to find ways to further shore up the district’s financial picture by sharing services.
That way, he said, both the district and the city can save money.
He said the key to success is to remember “We are all family.”