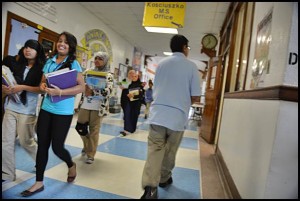 The Public School District is seeking a renewal of an 18-mill tax that generates almost $2 million a year. Hamtramck property owners with a Homestead tax exemption do not have to pay this tax.

By Charles Sercombe
Hamtramck school officials will once again ask voters to approve a tax.
Except this time it’s not a new tax. The public school district is seeking the renewal of an 18-mill tax used for general operation expenses.
The tax produces $1.88 million a year. The current tax will expire in December of 2015, and was last approved in 2005.
Voters will be asked to OK another 10-year extension on Feb. 24.
This tax is unique in that only non-residents who own property in Hamtramck pay it. That means Hamtramck homeowners who receive a Homestead tax exemption, get a pass on this tax.
“It’s no cost to Hamtramck homeowners,” said School District Superintendent Tom Niczay.
Last May the district sought and won a 4-mill sinking fund tax that will be spent on major repairs and renovations to school buildings.
The operating tax coming up for a vote is a vital part of the district’s $30 million budget.
“I need to get this through,” Niczay said.
Hamtramck’s public schools have been working through a budget deficit for the past five years, and it’s expected that by next June the district’s budget will be balanced.
Losing this tax would likely send the district back into a financial deficit. The tax renewal comes at a time when the school board will have already welcomed four new members.