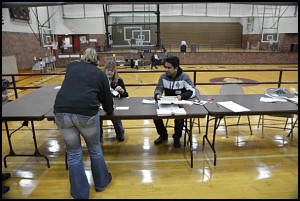 A little over 900 voters turned out for Tuesday’s school millage proposal. The millage was passed by a margin of 22 votes.

By Charles Sercombe
Let the repairs begin.
The Hamtramck Public School District’s millage won by 22 votes on Tuesday.
The millage will bring in $750,000 a year for the district and allow it to make repairs to school buildings for the next 10 years.
In total, 466 voters approved the 4-mill tax and 444 voted against it. A little over 900 voters turned out, which is less than 10 percent of the registered voters.
There is a long list of repairs needed, which includes floors, ceilings, roofs, restrooms, doors and security.
The district’s four schools are each 100 years old or nearly so.
Hamtramck’s millage election was one of eight school and city millages in the metro area up for vote on Tuesday, May 6.
The only millage to fail in Tuesday’s vote was a proposal to expand the Birmingham Library, which voters overwhelmingly rejected.
Lined up in favor of the Hamtramck schools’ millage were school boardmembers and most of the city council. Only Councilmembers Mohammed Hassan and Abu Musa spoke out against the millage.
School Superintendent Tom Niczay, who had campaigned door-to-door prior to the election, was elated about the vote.
“I’m very appreciative of the voters of Hamtramck approving this millage. The staff at Hamtramck Public Schools will work diligently to be accountable as stewards of the tax dollars collected,” he said.
Mayor Karen Majewski was also in favor of the millage. On her Facebook page, the mayor called the vote “a victory for Hamtramck’s schoolchildren and for the whole city.”
But some residents commenting on her Facebook page were not pleased with the tax. Former city councilmember Phill Kwik rejected the proposal, saying:
“If anyone actually thinks that giving those who run the Hamtramck School District more money will help Hamtramck’s children, you are sorely mistaken. The District has mismanaged money for decades, has blocked education reform in the schools, has let district property fall into disrepair, and — as a result — has robbed generations of Hamtramck children of a decent education. …”
Kwik’s wife, Camille Colatosti, is a former president of the School Board but was booted out of office in a recall election. The teachers’ union was largely behind that recall.
There was no apparent organized anti-tax campaign in this election. The district had a committee, made up of parents and school supporters, run the campaign for the millage.
For the average homeowner, the millage will mean paying an extra $70 per year. It was not known at press time when the new millage will hit the city’s property tax rolls. 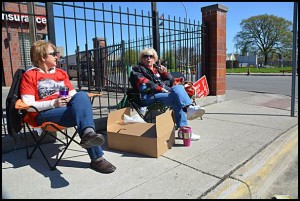 At 8 a.m., only one voter was waiting to vote at People’s Community Services, said this school millage supporter.