School officials go on the road to talk about millage 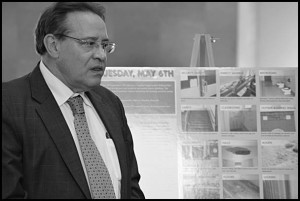 By Charles Sercombe
The Kosciuszko Middle School band went on tour Wednesday.
Their first gig was at the Hamtramck Senior Plaza and then the Col. Hamtramck Homes.
But it really wasn’t about music. Instead, the band’s performances served as a backdrop for public school officials to present reasons why the upcoming school millage is needed.
Although not directly telling those attending to vote for the millage, officials talked about the age of the district’s buildings and the many repairs that are needed.
The school millage will raise money to fund the many repairs needed. Voters will decide on the issue on May 6.
At the Senior Plaza, School District Superintendent Tom Niczay emphasized the tax millage cannot be spent on salaries or books, but just “simply to repair the buildings.”
He also noted that three of the school buildings are 100 years old or older and that Hamtramck High School was built in 1930.
He said it’s not a case of school officials failing to take care of the buildings.
“They get old,” he said.
Hamtramck High School Principal Rebecca Westrate gave a power-point presentation on the many programs the high school offers and the community involvement of students.
“HHS is where they take their step to the future,” she said.
At one point things got emotional when School Board President Titus Walters talked about the effort made by the public schools to provide a path to the future for its students.
“You’re voting for them – for these kids and the kids who come after them,” Walters said as he began to choke up.
The message seemed to work on the dozen or so in attendance.
Bradley Rutledge, a resident in the Senior Plaza, said improved school buildings will likely impact student performance.
“The condition of the buildings affects their education,” he said.