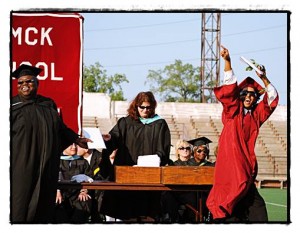 It's not easy being 'adequate.'

Hamtramck’s schools, both public and charter, have joined the growing number of other schools throughout the state and nation that are not making the grade.

This week, the state released the Adequate Yearly Progress results, and only two of the public school district’s six schools achieved AYP status.

Dickinson East and Holbrook elementary schools made the grade.

Adequate Yearly Progress is part of the national “No Student Left Behind Act.”

Those schools that continue to fail to meet AYP can be subject to a state takeover.

Critics of AYP say the standards are out of reach for most districts.

Only 60 percent of the state’s high schools attained that level for the last school year. That’s a decrease from 80 percent the previous year.

“They’ve made the standards even more ridiculous,” Niczay said.

Niczay also pointed out that, while the standards keep going up – eventually in the year 2014 all schools must have 100 percent compliance – the state is cutting financial aid.

The district was recently hit with a $420 per student reduction in state aid. On top of that, the district is facing a $6 million budget deficit.

If the district continues to fail to meet AYP, the state could step in and take over control and remove the school board from making decisions. The role of union teachers would also be weakened.

Despite the huge challenge AYP presents, Niczay said he will continue to map out a plan to bring all of the schools in compliance.

“We have to make these kids college ready,” he said.